Jeff awakened me from a sound sleep at 8:30 this morning. He shook my left shoulder until I opened my eyes and glared nearsightedly at him. Even without my glasses, I could see the grin spreading across his face.

"Get up. I think you need to look outside."

The cooler air came as a shock as I threw the down comforter back. Cold. I'm always cold, except in blistering midsummer, but this morning's chill air came as a shock to my bare legs. The double window is only a couple of feet from my side of the bed. I stepped over to it, avoiding dirty laundry and already-read books, and slipped my fingers between the slats of the blinds.Cold, said my fingertips. I fanned my fingers apart and squinted through the blinds. My eyes were dazzled for the briefest of moments before clamping shut to deal with the extra light.

Snow, said my sleepy brain. White. White everywhere. About an inch of snow.

I reached for my glasses and pulled on some more clothing to ward off the chill. Then looked outside again with eyes able to focus. Snow. Not a lot. Just a little. Enough to turn the rooftops white, blanket the grass, and quietly cover the asphalt on our little cul-de-sac. Somewhere out there, a few miles from here on the main road, traffic would be traveling as normal. There is a fine line between enough snow to cause magic and enough snow to cause problems; this thick dusting was just enough to stay magical.

But I am a geek, even if I am a silly and snow-besotted one. I went to the computer room and immediately tried to point the catcam outside to capture pictures of this white rarity. This required convincing Edmund to stay off of his favorite computer room sleeping perch, and major changes to the gain and levels of the tiny webcam.

But I have pictorial proof. 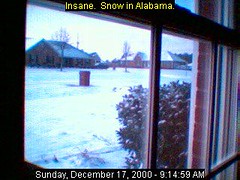 Thus I shall blame everything after on the snow. I chose not to go in to work today. In retrospect, the twitching nervousness in my brain tells me that I probably should have gone. But I did not. I did not even have the condition of the roads as a valid excuse. I simply decided that I wanted a full weekend, and that I would stay home today and have one. Have two full days away from work.

It was wonderful. I kept the blinds in the computer room open and continually stopped what I was doing to look outside. At first it was to watch the snow, which came down in clumps, then swirling flakes, then flurries….and then it stopped. Then I was just watching for the sake of watching; for the beauty of looking outside and seeing winter's white cloak instead of her normal drab outfits of grey and black.

I have not seen a significant dosage of snow since my junior year of college. Three years ago, that was. That was the weekend of the freak snow and ice storm that dumped somewhere around six inches of snow on Conway. I remember it more for the freezing cold in my dorm than I do for the snow itself.

Today I was snug and warm inside my house, laughing at my cats as they stood on their hind legs and slapped at the window, trying to hit the whirling snowflakes outside. I sat at my computer and thought about other snows, other places.

My thoughts turned to other friends. Many faraway. I felt guilty; it's almost a week before Christmas and it looked like, for the second year in a row, I wasn't going to manage to get Christmas cards sent out. Last year I had an excuse, as we had just moved into this house. But this year I had no excuse—at least, none that seemed reasonable to me.

While I played around on my computer, it occurred to me that I had installed Flash on my computer as part of my wipe-and-reinstall. Why not, I thought, create an animated card myself and distribute it to everyone?

I am the queen of wild-goose chases. But a quick rummage through ArtToday turned up a graphic that I thought would be suitable. An EPS file—even better. I opened it in Illustrator and began the tedious task of sorting everything out and grouping lines and fills into collections of objects that made sense. I separated out the objects into separate layers and, after several mishaps, imported the file into Flash.

I spent a couple of hours animating it. With snow on the brain, I opted for one of my favorite pieces of poetry—Robert Frost's "Stopping By Woods On A Snowy Evening"—and combined the two.

I sent the card out late this afternoon. While not perfect, and the design is a bit more simplistic than I would have liked, it conveys what I was thinking at the time. With Flash, the entire greeting card is only 45K—hard to argue with when you see how much graphical content you get for that 45K.

Perhaps I should've gone in to work today. Perhaps staying home and resting was better. I'm calmer. I think I'll be better able to tackle tomorrow's workload without screaming. It felt good to stay home and play. Hopefully my friends enjoyed it as well.