What I know is so much smaller than what I don't know.

She was a teenager when she married. From her pictures, she was never a particularly pretty girl. I know nothing of what her personality was like. I only knew her later, after years and circumstances had had their way with her.

Because of family disagreements and her death during my childhood, I never knew her well. To say that she never got along with my mother would have been a bit of an understatement; the knowledge that they never agreed on much of anything was common, yet unspoken, knowledge—even to me, the youngest—when I was a child.

My memories of her are vague at best. Her hands had that particular rhythmical tremor that I now see in my father; a condition that we know now is an inherited form of Parkinson's that affects only fine motor functions.

My clearest memory of her does not have a date. We were visiting, and must have stayed the night, because it was early morning and we were already at her house. I had taken my usual perch, atop the the strangely high bed in the large bedroom off of the dining room. I had always been fascinated by that enormous mountain of a bed; it was probably a high hospital bed and I, being probably no more than seven, found it quite a challenge to climb and thus thought it the most desirable playspace in the house.

On the wall, behind the bed, was the longest, thinnest picture I had ever seen. An old black and white photo of rows upon rows of sweaty-looking men wearing coveralls and carrying farm implements. When I was little, I once tried to count all the men in the picture, only to discover that I could not count that high without losing track of who I had and had not counted.

It fascinated me. I would stare into the photo and pick out a face, and make up stories about the person. Why were they there? What were they working on? They were not questions to actually be answered; they were questions for the sake of making up answers. My own personal, private game.

But, back to her.

One morning, as I played on the bed, she came in with a brush—and began to unpin her hair to brush it. I was both awed and shocked; my grandmother's hair was not unlike a helmet: something to be worn up and never seen loose.

Only years later did I learn that the phrase "charismatic Pentecostal" applied to her.

But she took it down, and unbraided it, and began to brush it. It held varying shades from grey to light yellow to white, and it ended very close to the floor. She was not, as I recall, very tall, but floor-length is floor-length, no matter how you look at it. I watched, fascinated, as she began first to braid her hair, and then to coil it back into its helmet and secure it with bobby pins.

It must have been that moment that I made the assumption that her hair had been a light blonde.

This assumption stayed with me until this past Christmas, when we went home to visit my parents. For as long as I can remember, my father has had an avid interest in genealogy. Having an unusual surname often sparks that in people, and my father was no exception. I asked him if he had any older photos of his family that I had not seen, and he pointed me to a photo album that I had never seen before in my life.

I opened up the album and found photos of a woman who looked like she might have been my grandmother—but that she had dark hair.

"I've never seen a picture of her from when she was younger than about forty," I said.

Dad seemed genuinely surprised. "You resemble her. More so as you get older." He pointed to his lips, looked at me, and nodded. "You get that same determined set to your mouth when you're dead set on something. Stubborn, just like her."

Tonight, I showed Gareth a photograph. A day or two ago I looked in the mirror and was startled by what I saw there: hair, once again, long. Admittedly, I have worn it long for most of my life, since all of my prior experiments with short hair have done nothing but prove that my normally unruly hair is even more unmanageable when left short. 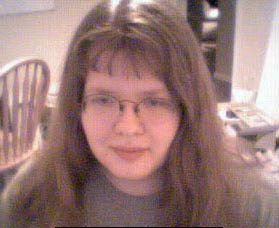 But I this weekend I looked in the mirror and saw a long-haired woman, a woman with that particularly bizarre strawberry-blondish color that can't ever seem to decide to be blond or red, and I found myself going back to the two pictures from the photo album that I scanned after Dad went to bed on the night of Christmas Eve.

But every time I look in a mirror as I reach behind me to put my hair up, sometimes it's all too easy to look at the reflection and see more than just a bit of a ghost of a grandmother that I never truly knew. 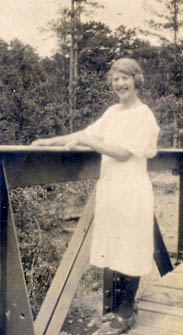 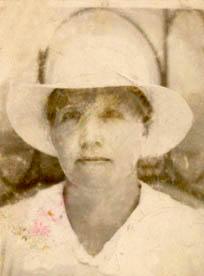 "Do you remember that picture she had hanging in the wall of the big bedroom? The long, skinny one?"

Dad nodded, and began to turn the pages of the photo album. He came to a picture which I immediately recognized as a smaller version of the photo I had stared at so many times as a child. "Your grandfather was part of the WPA. They built roads. These were all the people he worked with.

"I've still got that picture, actually. It's under the bed; I don't really have a place to hang it." He turned more pages. "Your grandmother went with him, you know. Did cooking and stuff like that." He pointed. "See, here's a picture of them together from about that time."

—and there they were, a man with a very rakish grin and an enormous hat—and a woman with long hair which, despite the monochrome nature of the picture, showed every indication of being the same color as my own.

Both long gone now; he in 1956 and she thirty years later.

What I know is so much smaller than what I don't know.