A couple of weeks ago, Susan popped up in my life again. I hadn't heard from her in a year or two; the last time I'd heard from her, she was sharing an apartment with a fellow whom, I later learned, was from the United Arab Emirates.

I will say this for Susan: she is cursed to live an interesting life. I began to understand this when I was a sophomore and she a freshman in college. She tried to explain her love of fast cars to me at one point in time, shortly after we met. I don't remember what it was that she drove, but it was all black—from the paint to the tinted windows to the leather interior. I called it the BatCar.

Around her license plate was the tagline "Good girls go to heaven, but bad girls go EVERYWHERE."The first time I got in the car, she explained that the car's computer system had a chip that served as a built-in speed limit—and that she'd had it replaced with a racing chip that had no such limits. Six years later, I can still remember what raced through my teenage mind at that moment: "Oh, that's cool. Except that I think you're going to get me killed in this car." (Obviously, she didn't.)

Susan was—and is—a lot of things. The ever-so-slightly bad girl that I never had the courage to be. Domestic girl. Urbane girl. International traveler. She taught me to appreciate wine and only laughed at me a little when she had to teach me how to cook hamburger.

My first dorm room at UCA was literally across the street from her apartment complex. She had a washing machine, and I had a standing offer to come use it at any time. "Washing clothes at Susan's" usually meant I'd throw in a load of clothes and then she'd loan me a bathing suit and we'd go soak in the pool for a while. Then we'd make dinner and watch a movie, and by midnight I might have done two dollars' worth of laundry. At the most.

When she called tonight, she told me something that had me doubled over with laughter: "Aaron's** been asking about you. I still give him a hard time about that night…"

It came back to me all in a rush; I was a sophomore and Susan a freshman, and Aaron was tipsy enough that he propositioned both of us in the same night. He, of course, forgot the cardinal rule: women friends talk to each other, especially when funny things happen, and they compare notes. Susan and I got together later that night, after the party, and we both were amused to learn from the other that he'd made the same suggestions to both of us.

From what I can tell, Susan has never let Aaron live this down in the six years since it happened.

She says that in a moment of weakness, Aaron extracted a promise from her: that, if neither of them were married by age 40, that they'd marry each other. Susan has since suggested a far more practical option: "Get your law degree so that you can handle my first divorce."

Even though I haven't seen her in three and a half years, I can hear that uniquely-Susan blasé, teasing note in her voice. Even more so, in her response to me: "I have to be married by then! I can't marry him—he'd drive me crazy! I swear to you, Amy, he'd turn me into a husband-beater!" 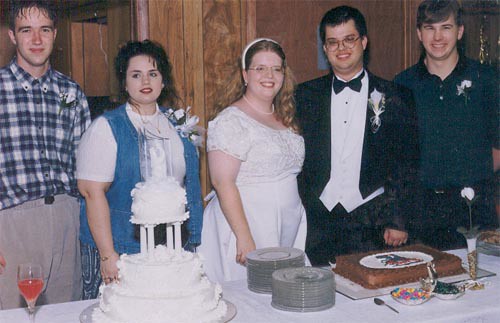 The cake crew
at , Tull, Arkansas, United States by domesticat.

In this photo, Susan is standing next to me. I wish I had a better picture of her, but this, strangely enough, seems to be the only one I have of her. Don't let the look of innocence fool you for one second; in all fair fights (and most unfair ones), my money's on her.

I've promised her that I'll leave for Arkansas a bit early so that I can stop over in Memphis and see her. It's been far too long. I've missed hearing about things like her penchant for high ceilings and hardwood floors, her love for Himalayan cats, and the overall aura of thorough oddness that just seems to follow her wherever she goes.

I have a feeling it's going to be a long, long talk.

On 8 Feb 2002, ruminator said...
have fun reconnecting with a friend. it's an important part of life and i know that i've lost track of too many of mine. bon voyage!
On 8 Feb 2002, gfmorris said...
-chuckle- It's the reconnection that reminds us who we are and lets us see how far we've come. :) [Is that jowilson to the Susan's right in that photo?] I got a chuckle out of that license plate holder. :)