This is a lot of love.

I've been promising these photos for quite some time, but a post such as this had to wait until I'd gotten both rolls of film developed. After Dad was diagnosed with cancer, I spent a week in Arkansas, staying with Mom and Dad. I made a point to catch up with some old friends while I was there—all of them old friends who see me rarely, now that I live four hundred miles away.

(A number which Eleanor always says with a glare.)

Shortly before I left, we celebrated Sean's birthday at a local restaurant. All of the locals, minus Geof cleared their schedules to show up: 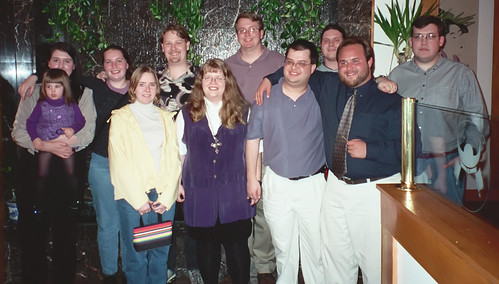 The cats think the blanket at the end of the couch is theirs. Especially Tenzing, whose favorite place to sleep is under a pile of blankets.

My first trip out to Arkansas was unhurried, driven in daylight. I stopped off in Memphis to finally see Susan, whom I hadn't seen since Jeff and I got married in '98. She's yet another of the cat lovers. Despite the fact that Susan assured me that Prissy didn't mind having her picture taken, I think you'll agree when you see this photo that I wasn't sure if I should believe her.

I ended up alternating evenings with Colter and Eleanor, both college friends who live down the street from each other. We have a long history of bizarre photos, Ellie and I do, and this overhead shot of the sisters in weird is yet another fine example of silliness in the midst of personal upheaval.

She was kind enough to go with me to a local bar, where Colter's band was playing. After having known Colter for eight years (egads! the brain reels at such a number!) I have finally seen Colter play in public. But my favorite shot of all: sometimes, when the guitar player knows you, you can get your favorite guitarist to wink at you:

The second trip to Arkansas has been chronicled in great detail. (entry) Jeff and I had spent the day in Nashville with Danno, thoroughly enjoying ourselves despite the rain and gloomy weather. Five photos from the end of the day:

What I didn't know at the time was that all hell was breaking loose back home. My father had been taken to the hospital via ambulance that afternoon because he'd begun having trouble breathing. In their panic to get to the hospital, my mother didn't take my cell phone number with her. (I'd even called her that morning to make sure she had it.) As a result, we had no idea that anything was wrong until we got home at 10:15 p.m. By 10:40 p.m. I was packed and on the road again. (see the entry)

My father died on the 19th. The visitation was held shortly thereafter, and I saw more family and friends than I could shake a (grateful, sad, grieving) stick at. Rachel, who wasn't able to be there, asked her mother to get a photo of her with my nephew Dakota, so I took one. Along the way, someone took a photo of Jeff and me—ironically enough, it's one of the best photos taken of me in years:

Jeff and Amy
by domesticat.

Andrew, Joy, and Eleanor showed up as well—having old friends there was a great comfort to me.

Ryan showed up as well—an old classmate, now a state trooper. Most of the requests regarding Dad's funeral came from Mom; having Ryan serve as our police escort was the one thing I wanted most. The details on this subject are best suited to a post of their own, but suffice it to say that Ryan was the right choice. Dad adored him; it just seemed the right thing to do.

The day of the funeral wasn't a day for photos, but as promised, I did get a photo of my sister and her husband Carl. I was stunned (entry) when my college roommate, Monica, showed up for the funeral.

Lastly—I wanted to confirm the existence of an old Southern tradition. You might've heard jokes about how, in the South, when someone dies, everyone shows up with food? It's true. More arrived after this photo was taken, but this was taken before everyone started eating.

I showed Danno the photo an hour or so ago. His response said it well: "They say that food is love. This is a lot of love."