You just thought I was teasing you with a subject line such as "eggbeater Jesus." Trust me. I'm not.

*Anyone who has been here for five years will laugh at the idea of Sprocket being the most memorable landmark in town. Any old town, they'll tell you, can put up a fake rocket (see also, that little visitor's center on I-65 at the Alabama/Tennessee border just north of here). They'll drive you down I-565, turn south on Memorial Parkway, take the Governors Drive exit, and tell you to keep looking to your left.

It takes a truly special town to have an Eggbeater Jesus.

It's ok. We don't understand it either, though I must admit that ever since I saw it for the first time in 1998, I wanted to find someone in charge at First Baptist Church and ask them the only question that can possibly be asked:

"What were you guys smoking when you commissioned this?" 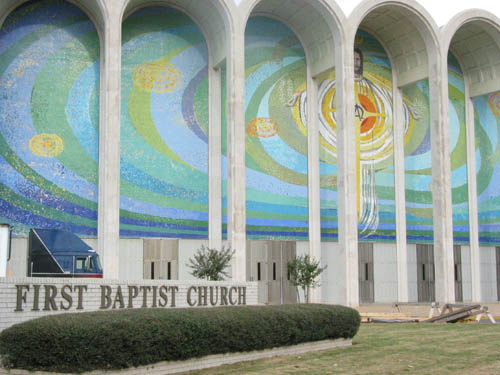 Most locals, when presented with landmarks, marvel once from a distance and then immediately become so blasé about them that they never stop to look. I was the same way; for years, I took every out-of-town friend on The Journey, 565 to Memorial to Governors...and not once did we ever get out of the car.

When Andrew and Stephen's parents visited recently, we needed to make a quick run down to the south end of Memorial Parkway. On the way back, I made a quick side trip down Governors so that they could see the church. This time, though, I got out of the car.

I had my camera with me, and decided to get some photos.

You can imagine my surprise when I got up close to the church, looked up, and realized that the good ol' Eggbeater Jesus was not, as I had assumed for years, a painting.

In fact, it was a mosaic. 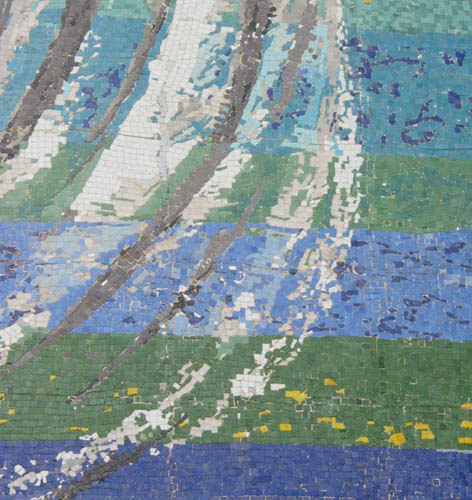 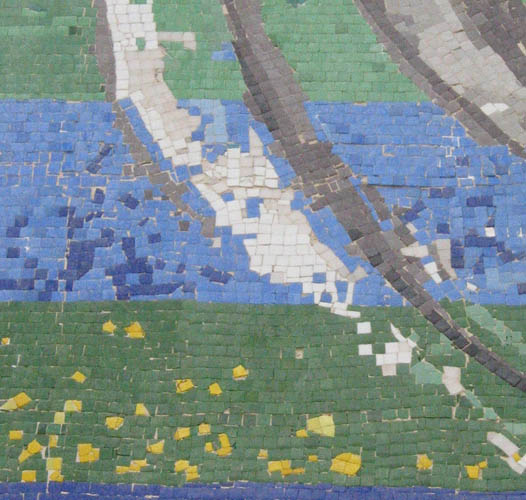 I still don't know anything about the artwork, but I certainly don't laugh quite as much as I did before. True, it's cheese, and probably historical cheese, but at the same time, mosaics of that size and complexity just aren't seen in the American South.

There are no answers to be had here, no funny point or [anti-]moral. Just photos.

Every now and then this town catches me by surprise.

* The young and more irreverent visitors will tell you that the best way to refer to the center is by calling it "Sprocket." The really, really irreverent ones will point out Sprocket from a mile away by pointing at the largest rocket and yelling "Look! It's the Great White Penis!" Trust me. Avoid riding with the locals. They're kinda scary. Too much rocket fuel.

On 23 Nov 2002, canspice said...
When I read "most memorable landmark in Huntsville" I automatically thought "penis". Yes, I was thinking of Sprocket.
On 23 Nov 2002, boredelf said...
If I remember correctly (Kat may be able to correct me if I'm wrong) but they commissoned some dude from Italy to do that mosaic. Yes I was once sort of a local when younger. But that was a long time ago, so I may not be remembering correctly. But yeah, with all of the huge, intricate Basilicas in Italy this doesn't seem quite so odd... still odd for the South though.
On 23 Nov 2002, gfmorris said...
You know ... I'm not going to make Baptist jokes. I'm in too good of a mood. :)
On 24 Nov 2002, jowilson said...
Who knew? Well, I did, when Jess gave me the guided tour of Huntsville while you guys were watching Pride and Prejudice. Of course, something of that magnificence needed to be photographed from outside of a vehicle, and, once I got up close to it, I discovered it was a mosaic. It never occured to me at the time, but now it occurs to me -- damn, that must have taken a long time to make.
On 25 Nov 2002, Monica said...
You know, after giving this some serious thought, I believe the artist was trying to depict the day of Ascension, when Jesus was "whisked" up to heaven! -grin
On 25 Nov 2002, gfmorris said...
-groan-
On 26 Nov 2002, kat said...
Okay, so you guys made me really curious now that a monument in Huntsville that I'm so used to is being called to question. If you go to First Baptist Church's website, they have some info about the mosaic on the front of the building. Your questions are now answered. :)
On 2 Dec 2002, Jessica said...
I was just in Huntsville visiting relatives and found your site searching for "Jesus in the Eggbeater". The other "landmark" that cracked me up is the "useless overpass" - the overpass that goes over nothing in front of the Hollywood 18 movie theater.
On 2 Dec 2002, gfmorris said...
It isn't useless ... drive along the access road sometime and think about getting to Gibson's while you're going southbound, and you'll like it. :)
On 21 Jul 2003, lt said...
yay! someone who has a pic of "egg beater jesus"! I was trying to describe it to a friend and words just don't do it justice....