There are those who say that animals have no souls; these people are undoubtedly blood kin to the well-meaning people who think that something so formal and ceremonial as a funeral is supposed to bring closure to the lives of the living.

He was never a large cat, although we joked that he was; even Tenzing, my little kitty, is bigger than he was. I never saw him during the first days of his life with us, because I was away at a summer camp. My first memory of him is from a phone call, placed from a crowded and noisy bowling alley, with this new friend Andrew (yes, the Andrew who now qualifies as one of my oldest friends) standing beside me, talking with friends.

"We found this kitten," Mom said. "We don't know if he's going to make it or not, but we've taken him to the vet and had him cleaned up, and we're trying to feed him and get him stronger. Dad is calling him Little Bit.."

It was a good name, for he was just a little bit of a thing. To understand why he was as loved, spoiled, and cosseted as he was, you have to understand his history.

While working on the rent house next door, my parents had heard what sounded like a kitten's mewing, but could not find the kitten. They realized that the kitten probably belonged to the adult cat that had been hit by a car somewhere near our house a couple of days earlier. They finally found the kitten hidden in the woodpile. Another kitten, jet black like him, had not survived. He was ill and hurt; maggots had found their way to one of his back legs, and he was weak and dehydrated.

Mom took the starved, half-dead kitten to the vet, who cleaned him up as best he could and gave Mom formula and a tiny bottle to feed him. The vet told Mom that the kitten might be two weeks old, and that he might or might not live through the night. When Mom brought the kitten home, she discovered that even the tiny kitten bottle was too large for his mouth, so she fed him with an eyedropper. He was so thin that he could not keep warm by himself, so he slept between dry washcloths on top of a heating pad.

It was summertime, and Mom, being a schoolteacher, was home during the day. To keep an eye on him and keep him warm, she used two clothespins to pin up the tail of her shirt, not unlike a kangaroo's pouch, and carried the kitten around with her as she did her chores. By the time I got home from camp, he had gained a few ounces. The inner side of his back leg was healing, although it appeared that he would never completely regain all the fur he'd lost there.

My only recollection of his size is that the first time I held him, he was so tiny that he completely fit in the palm of my hand. (Factor in that my hands are very small.) He curled up in my left hand, stared at me with his blue kitten eyes, and went to sleep. His entire front paw was smaller than my thumbnail.

He survived, and became my buddy. I turned fourteen that year; by the time I graduated from high school, he was a sleek black cat with an elegant, diamond-shaped head and luminous green eyes. He was my good-luck charm; a scritch for the Bitser was the last thing I did before leaving the house to go to my high school graduation, before leaving for college, and before driving to the church to get married. 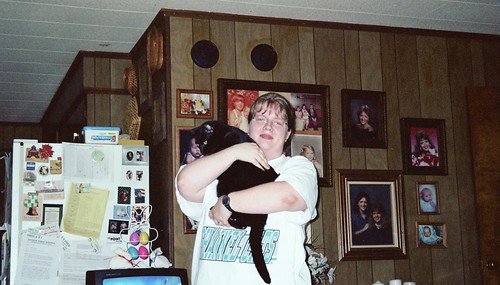 After I left the house for good in 1994 (barring college breaks), Bit transferred his allegiances to my father. They ate together, snored in the recliner together, and even tended to stare at each other while Dad was in the bathroom and Bit was in the litter box. Bit would curl up with Mom, perfectly content, until Dad returned from work, when he would run to the door. Dad would stand at the entranceway between the dining room and living room, removing his boots, and Bit would "tattle" on us. Dad would cosset him, feed him a bit more than he should have, and Bit would eventually decide that all was right with the world once again.

When Dad was diagnosed with cancer, Bit seemed to understand (see the entry, "In terms of the Bitser") just as well as the rest of us. As Dad began to be in more and more pain, Bit would no longer curl up in Dad's lap or on Dad's feet, as he had done for years. Instead, he sat next to the chair, or on the armrest, and … guarded. He hovered, fussed, meowed, and only seemed to relax his guard when Dad told him to.

When Dad died in March, Bit grieved - perhaps more openly than the rest of us. Mom said he ate virtually nothing for a long time, and lost a lot of weight. Eventually, he began to eat a bit more, although not much. What made my heart ache was seeing him sit in the window of the dining room. All day, every day, he sat in the window, watching Dad's truck and waiting for the impossible - for Dad to come home.

The last night we were there for Thanksgiving, I pulled up a chair next to his window and petted him. For a little while, he climbed into my lap and accepted scritchies, but did not purr. When I put him down, he immediately returned to the window and began, once again, to wait.

Sis told me this morning that three days ago, Bit escaped from the house; in the past, this was a once-a-year event. Mom retrieved him, only for him to attempt to escape again. She retrieved him a second time. He escaped again. The third time, he did not come back.

It may be trite to say that Bit went off into the woods to die, but having seen the forlorn, obviously grieving, cat he had become, I think I understand. We joke sometimes about how our cats seem to wake up in a new world every ten minutes; if that's true, I cannot help but imagine how awful it must have been to have repeatedly awakened to the same nightmare, over and over.

We humans are blessed with an amazing capacity to love, along with a great capacity for knowledge and compassion, and even we stand powerless against the riptide of grief. If we cannot explain it or make it better, how is a cat to cope? I know in my heart that Bit is gone, into the woods and away from us, but I cannot help but think that in some ways, Bit has been gone since the nineteenth of March. When Dad died, something died in him too.

I make no bones about my ambivalence about religion in general. I'd like to think that if there's such a calm finality as a heaven, that it's filled with the joy of the cat who has caught the last sunbeam of the day and no longer has to wait for their favorite person to come home. I'd like to think that somewhere, somehow, Bit no longer has to sit in a window and wait any more. It's not exactly consolation, but it will have to do.