First, before you read, see these photos of the Washington Monument that we took. You may now resume your regularly scheduled entry. - Amy.) 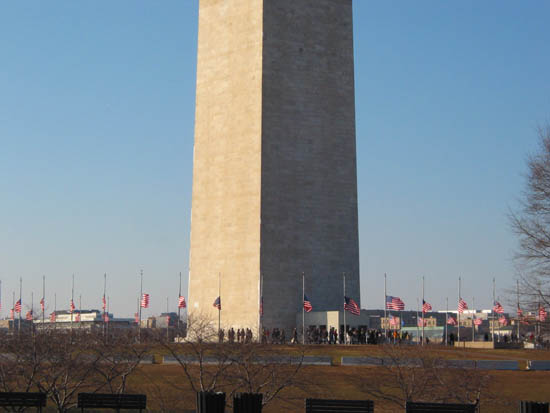 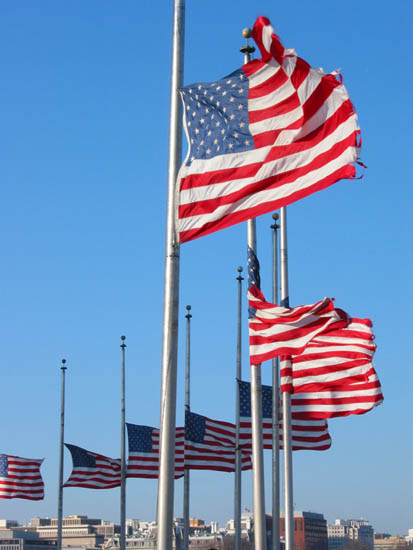 We slipped away shortly after seven a.m., in more daylight than I expected for this early on the first of February. I took the first leg of the drive, slanting us east from Huntsville toward the sudden outcrop of hills just south of Chattanooga.

Destination: Washington, D.C. Our long-scheduled vacation had, at last, come to fruition. It was an easy drive, really. I've done it before—alone—but this morning's abrupt bout of insomnia had left me tired.We listened to NPR until the broadcast looped, then turned it off. There was little else we needed to know for today except for our driving direction, which were safely stowed in the glove compartment.

I forgot to turn on my cell phone before we left. Only during a particularly dull stretch in Kentucky did I think to do so. When the voicemail beeped, I thought nothing of it; it said that Stephen or Misty had called from their house. For some reason, the caller ID did not save the real number—the number of Andy and Heather's house, our destination.

I listened to the voicemail. It was garbled—I was roaming—and I only caught parts of the message:

I balanced the steering wheel with my left hand, unsure of what I just heard. My jaw fell open as I began to understand. I said, "My God. I have to play this again." To the sound of Jeff demanding, "Hear what again?" I heard...

Andy: "Hey, Amy, I don't want to start your trip with such bad news, but it looks like the space shuttle Columbia broke up on re-entry. Um, give us a call if you get this."

Out of the corner of my eye, I saw mile marker 62 of I-75 flash by. Slack-jawed, open-mouthed, I gave Jeff the barest details of the message. I drove. He fumbled for an NPR station. We listened to horrified eyewitness accounts, but only one stuck with me; a man who had gone outside to watch the shuttle streak by and instead saw something much worse.

We ate lunch in a Subway east of Knoxville, where a few tables were taken up by out-of-towners like ourselves. The speakers, tuned to news, played news of sadness. It was hard to tell if anyone besides us was even listening. Perhaps they had all used the extra hour or two to cultivate an external numbness I had not yet found.

It is 12:45 p.m. - Eastern time. We've just taken the on-ramp for I-81, headed north out of Kentucky and into Virginia. Jeff is driving; I have my notebook securely propped on my right leg and the door's armrest, and am writing carefully between pothole lurches.

We have heard the radio. I have spoken briefly to Andy, and at greater length with Jeff, but for now, the vast majority of my thoughts about Columbia are untouched by the opinions of others. We have seen no television footage, and we have turned off the radio for now. I know that, outside this car, the ramifications of this morning's disaster are changing the workd I live in, but here, cut off by the isolation of car travel, very little has materially changed for us.

We still have a long way to drive today. I'm fairly sure we won't be arriving to the same world we left this morning.

Right before we started our drive, I stared at the kitchen table for a moment and scooped up the $7 in one-dollar bills that lay on it. I shrugged and said, "I don't know what I'll do with it, but I'm sure it will come in handy for something."

I never expected that I'd use it to help pay for parking near the Air & Space Museum, so that Heather and I could walk to the Washington Monument to photograph the half-staff flags around it.

On the way back to the car, photos in the can, I bought a keepsake copy of today's newspaper. It was not exactly the kind of souvenir I planned to buy on this trip, but it's what I have.

On 3 Feb 2003, Tialessa said...
I woke up to the news - it took me back to 1986 when we had a school workday & I woke up to the Challenger news. I cried more to the Columbia news than I did to the Trade Center disaster - probably because I still can't believe the Trade Centers fell & I know (because of Challenger) that tragedies like this can & have happened. I'm so sorry your vacation started out with this news.
On 3 Feb 2003, gfmorris said...
I bought the last Sunday copy of the Huntsville Times that the Walgreens on University had this morning. The clerk looked at me and quietly said, "We never sell out of the Sunday paper."