How does one love a goat?

Three and a half hours' worth of meandering south and east on the back roads will bring you to a highway, which leads to a smaller road, which leads to a gravel road. Even if you turn off onto the gravel road, you might miss the driveway that appears to lead to nothing but a copse of trees.

Like many of the good things in life, there are no signs pointing to it that say "This is where you need to be." Just a mailbox and a fence for the horses.

Most of us who know how to find it call it the Geek Farm, because that's what it is: a place where both animals and geeks are tended to. I had been coming there regularly for a couple of years before I learned that it had an official name: Eastwind Farms.

It is located in a part of Georgia that might be described as the Atlanta metro area - if you squint a bit. Metro Atlanta's pushy, insistent fingers haven't quite grabbed hold here yet, and there are still vestiges of the sleepy small backwater it once must have been.If you backtrack from the gravel road to where the smaller road intersects with the highway, there is a barbecue shop that isn't open on Sundays but which has a table reserved for Certain People at all other times. Anyone who has to ask who the table is reserved for doesn't have a seat there. Cops, mostly. City Council types. If you come in there often enough, the waitress learns your drink, your entrée, and your laugh, but probably not your name.

Brian and Suzan qualify as regulars.

When we last joined them for a long lazy chat in the guise of good barbecue, the waitress brought out drinks for Brian and Suzan and got a laugh at the new visitors who still needed a menu. She cocked her head quizzically while looking at me, shifted her gaze to Suzan, then looked at me again.

Suzan and I shared confused glances while Brian laughed into his drink.

Suzan and I shrugged. Hard to remember who, but someone pointed out that we wore similar glasses, neither wore makeup, and each of us had long, not-quite-curly hair pulled back into untidy ponytails. T-shirts and jeans completed the illusion - but no, not sisters.

Stay friends with someone long enough and, even though you have different interests, you come to care about the same things - first, because your friend cares about them, but eventually because you begin to understand a little of why they must care for those things.

Suzan raises goats. Her love for them is obvious from the first moment she started talking about them, but it left me confused at first. The first time I heard someone mention that she and Brian raised goats, I thought, "Goats? How in the world does one love a goat?"

My memories of goats were limited to the one that my mother's hairdresser had many years ago for the express purpose of weed control, and for the implied purpose of attempting to eat anything else that didn't try to eat him first. He was never a particularly pleasant creature, with a strangely-wiry grey coat and a propensity to nip at anything within reach. He certainly didn't inspire love.

After a couple of years of visits, you become accustomed to the weekend rhythm of the Geek Farm. The understanding is simple: since the two-legged geeks can fend for themselves in the morning, they're expected to sleep in and do their own thing while the four-legged ones get tended to. Chances are, before the visitors awaken, Suzan has wandered out in wellies and jeans to do the feeding and milking; you're more likely to wake up when she returns than when she leaves.

It's ... timeless, in a way that's difficult to explain. I'm fully aware that both Suzan and Brian will read this entry, and they probably won't understand it either, but in a world where it's easier to connect with one's computer and newspaper than the next-door neighbors, visiting a place (and people) that seems so firmly rooted to the land it rests upon is incredibly - calming. Healing, even.

Life hasn't been easy at Eastwind Farms this year. Raising animals is a double-edged sword: the joy of birth sometimes comes with its equal and opposite: the grief of losing them. Suzan lost two in quick succession this spring: a doe she'd just acquired through a trade, and Aria's kid (a doe) that was unexpectedly stillborn. 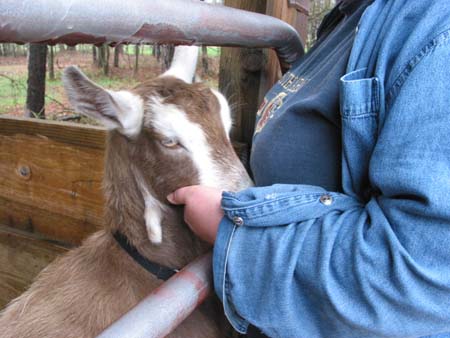 This year's breeding plans came down to Lana, who was due to kid during the weekend of the first dragon*con staff meeting. As the date drew closer, Suzan's comments made it clear that it was likely Lana was going to kid twins. Though it was news to me, twins are not uncommon for goats. After two quick disappointments in a row, Suzan was honest - she really needed Lana to produce a doe this year. 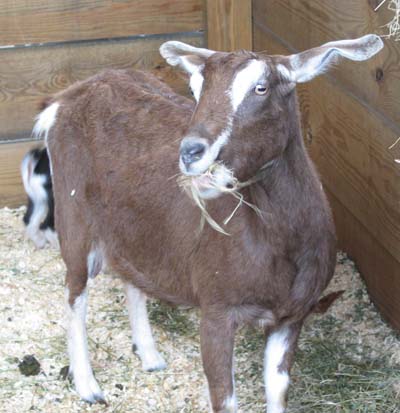 We could cross our fingers and our toes, but the rest was up to Lana, who was taking her sweet time to present her newest kids. As Misty and I drove toward Atlanta, Suzan called, saying that Lana was just enormous ("big as a house" was the exact phrase, if I remember correctly) and that the vet was coming by sometime that afternoon to induce her. If she hadn't kidded by the time we got there, we could expect to be in for a slightly more adventurous weekend than we'd originally planned.

Lana had other plans, as evidenced by Suzan's next call, less than an hour later. Most of the first fifteen seconds was a combination of happy yelling, cell-phone static, and words that I didn't quite understand, but I caught the phrase "twin does" in the middle of it and translated everything else: "it's all ok now."

Between untranslatable happy sounds, I gathered that the kids were healthy, happy, and had a better handle on nursing than they did on walking. Suzan's relief was palpable, even through the quantized and flattened sound of the cell phone. 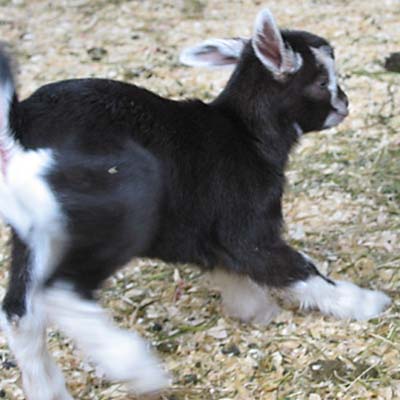 We saw them for the first time a few hours later, as the early dusk of spring turned out the lights on the farm. Both kids were bedded down in the hay, sleeping soundly. Lana, still big, but no longer house-sized, was having dinner. The kids already had distinct personalities, Suzan said; Alley was quiet and sweet, while Devvie showed all the signs of being an inquisitive little firecracker. 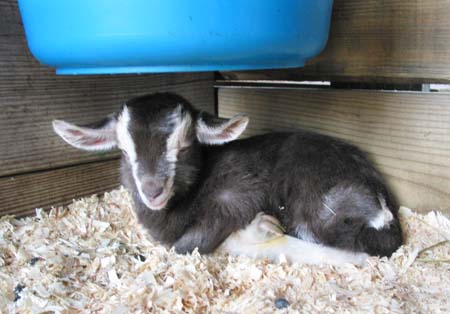 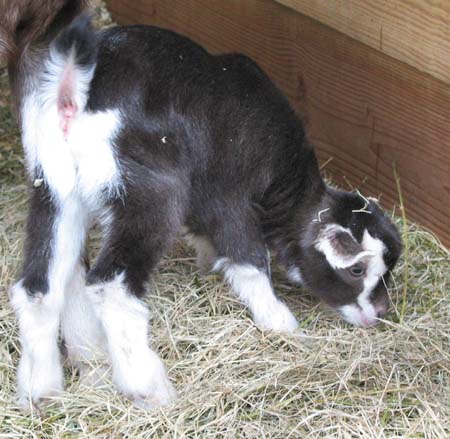 The next morning, I brought the camera and took pictures of the kids. Like all babies, they don't stay this little for long, but a one-day-old goat can be compared in size to a puppy.

On Sunday, as we meandered from highway to highway on our way home, I compared the unfriendly goat specimen I'd known many years ago to these new and admittedly cuddly ones.

As for my original question? Some answers aren't terribly hard to figure out on your own. 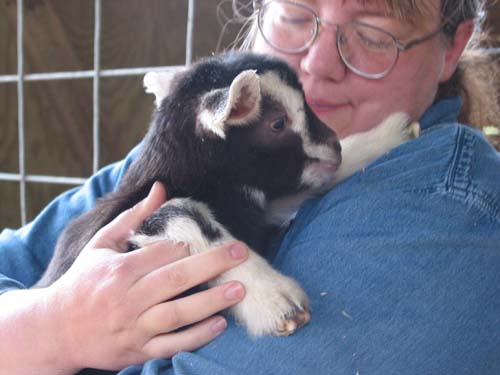