The third year will be the charm(s), the boots, the skirt, the shirt; anything but the mundane. "At last," some of my friends will say, one in particular.

I'm not the dressing-up type. Or maybe I'm the perfect dressing-up type. It depends on how you look at it. For the flamboyant, the outgoing, dressing-up is a simple matter of tossing together bits and pieces and letting your personality do the rest.

For the quieter, the process is more arduous. The question is not only "Can I fit into this?" it is "Can I pull this off without horrible embarrassment?" (Or, as I rather caustically like to point out, "The only good part about being the fat chick is that you can look in the mirror and never have to ask, 'Does my ass look fat in this?' because you already know the answer.)

If you listen to enough tech staff radio parties, you know firsthand that there are plenty of people in this world who wear costumes that are wholly inappropriate for their body types. I hate to generalize in this case, but these people are almost universally women. There comes a point where a tightly-laced corset is just going to make matters worse, not better. (Hint: if you've got jiggles on top AND bottom once your corset is laced, you should consider a different outfit.) There comes a point where a woman really shouldn't be wearing a bandeau top in public.

So, after a couple of years' worth of badgering by Jody, I agreed to hunt for a costume for this year's dragon*con. I ignored his cries for a corset, but decided that the suggestion of evil boots wasn't a half-bad one. Evil boots I could work with. Form-fitting, yes, but in a way I was prepared to deal with; I ordered the boots.

When I was in Memphis, I found a skirt. It was short enough for 'con, long enough that I wouldn't embarrass myself too often, but still not quite long enough that I was willing to walk out of the dressing room to show it to Misty and Stephen once I'd confirmed it fit. (I have this policy of no above-the-knee skirts in public without some kind of camouflage for my melanin-challenged legs.)

No matter what anyone tells you, a lifetime of shyness can't be broken by five minutes in a fun little skirt.

I'll indulge my love of men's white dress shirts by buying an enormous one and wearing it over the equally-evil black shirt I've had in reserve for a few months. With that, the black skirt adorned with more D-rings than is technically necessary†, black tights, blue-streaked hair, and lovely shoes, I should be good to go.

I forgot to mention the shoes, hmm?

I have two choices. For minor ass-kicking needs, there are the slipper-styled shoes with a 3.5" heel and 1" platform. (Amazing how a well-placed $10 at Junkman's Daughter allows you to see over a few heads at a concert.) 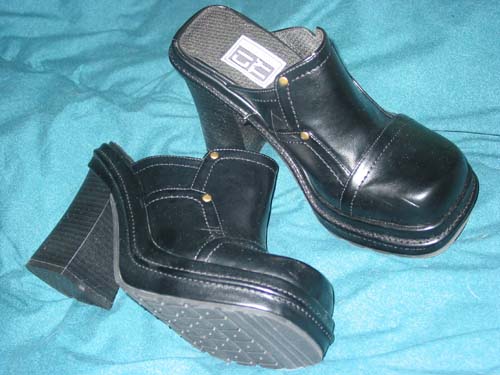 Choice #2 is a beauty - the kind of shoe I've always wanted but never been able to justify buying. Knee-length boots with lots of shiny silvery bits. 1½" platform + 4" heel. 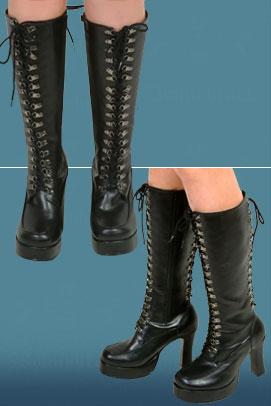 That there's some sky up there, yep.

The shoes might not manage to make me invincible, but maybe they'll let me fake it for a few hours. Give me enough bravery to wear the skirt and the shirt, to flaunt the blue hair, praying that I've finally done enough to move outside Jody's disdainful classification of "mundane" without alarming my friends and spouse.

I can do this. Really, I can. I won't be one of the blonde nymphets that are a dime a dozen at 'con; I'll be one of the stouter, surlier staffers with a take-no-prisoners attitude and boots to match. Not to mention, the boots actually let me pretend to be a good bit taller than I really am.

It's amazing how people's attitudes change toward you when they no longer have to tilt head/eyes downward to talk to you. How a physically level conversation changes the mental aspects of the conversation. How fascinating it is to be able to stand face-to-face, not face-to-chest, with the person you're talking to at the moment.

How annoying it is to be four inches taller than usual and to receive a pat on the head from Thomas, saying, "You're still short, sweetie."

On the way home from Atlanta, I mentioned this to Jeff, who had been quite amused by my enjoyment of my newfound, albeit temporary, height increase. "Are you going to go out and purchase a bunch of platform shoes?"

† Jody, I heard that thought. Yes, you. You can just quell it right now. You are NOT chaining me to anything in backstage Centennial IV. Just remember, if you chain me to something that doesn't move, who's gonna bring Gatorade and dinner to your pirate crew? Exactly. Play nice or your daughter will be the only grade-schooler who has her nose pierced....

On 8 Aug 2003, eviloompa said...
I had absolutely NO intention of chaining you to something that doesn't move in CenIV. Now something that does move on the other hand...... I'm very proud of you....I think you might just find that you enjoy it a little. And I dont need your help corrupting my daughter...I think I will do just fine on that all by myself.
On 8 Aug 2003, domesticat said...
I think the worst moments will be the first five minutes after I first show up wearing said clothing. I think if I make it more than five minutes, I'm gold. We'll see.
On 8 Aug 2003, eviloompa said...
You will be fine...if ANYTHING says anything that is even remotely derogatory then they shall be forced to suffer the WRATH OF OOMPA (tm) and this is NOT a good thing.
On 8 Aug 2003, domesticat said...
Besides. What you're implying has two outcomes. Either a) you are going to chain me to you, which means you're going to have to explain a good bit to our respective spouses...or you're going to chain me to one of your minions, in which case you're going to have a lot of explaining to do to me. If the latter is the case, do I get to pick the minion?
On 8 Aug 2003, eviloompa said...
The answer is a) possibly and b) no
On 8 Aug 2003, heather said...
My outfit is a little less extraordinary, but it does involve a bit of Hot Cleavage Action(tm). I still have to run around and take photos. I just hope a boob doesn't fall out.
On 8 Aug 2003, Tialessa said...
No outfit for me...... Though....... I DO have a cool funky multicolored skirt.... No good shoes to go with it.... Hmmmmmmmmm If anyone sees a "bitch" shirt like Vincent once had - I WANT IT!!!!!!!!!!
On 8 Aug 2003, domesticat said...
Heather - I'm sure if a boob falls out, someone on tech staff will gladly chase it down for you. You know those tech staffers, always happy to help. Danielle - try hitting Junkman's Daughter. They have a little shoe area upstairs. Most of them aren't going to be your taste (unless I've greatly underestimated your leanings toward drag-queen goodness) but they do have some fun and funky ones that are wearable by the mortals amongst us. The bandana you liked - I think I told you that I found it at Hobby Lobby, right? If you don't have one nearby, let me know and I'll pick up one for you. They were less than $2 apiece.
On 8 Aug 2003, gfmorris said...
Thanks, kids, my head's exploded now. Damn you, Heather. Damn you.
On 9 Aug 2003, Monica said...
You know, Amy, after the plaid Keds, I never really thought I'd say this, but... OH MY GOSH!!! I LOVE YOUR SHOES!!! This outfit will be awesome. Watch out, though, the power of the funky chunky shoe is not to be underestimated.... *laugh*