Last night, in the bathroom, having traipsed there with drinks firmly in hand, Eleanor and I were noting that we'd somehow, through the vagaries of time and distance, become wedding-and-funeral friends. I haven't seen her since my father's funeral, and she hadn't seen Dan and Stephanie since Jeff's and my wedding seven years ago.Some things about us have changed.

Some most emphatically have not. 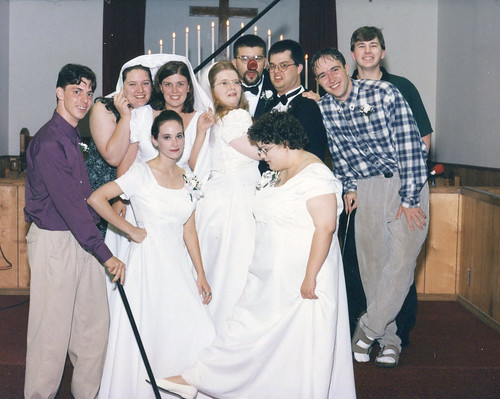 Crazy, the lot of you (low-res version)
at , Tull, Arkansas, United States by domesticat.

Here's us, being dorks in formalwear, seven years ago when Jeff and I married. Yep, that's me in the wedding gown, all long hair and glasses. If you look to your left, you can see two people hiding under the skirt of my dress. The one in white is Kara, and the one in green is Stephanie. On the right-hand side of the photo, back in the back, Dan is in a green shirt and doing his best to be seen over jowilson.

Or, if you want a more standard photo, there we all are again at the wedding rehearsal. Dan and Stephanie are front and center. 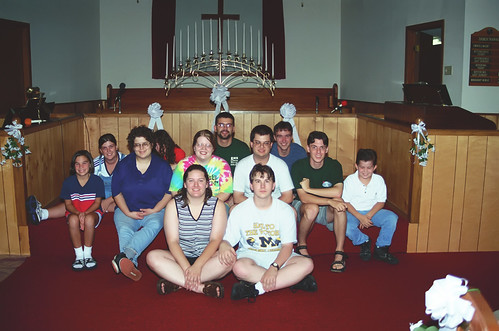 Fast-forward seven years, to a ceremony in a gorgeous hotel conservatory on a sunny Saturday whose blue sky just couldn't be beat with a stick. We missed seeing Stephanie walk down the aisle due to road construction, but were there for all the important parts. It was a simple ceremony, simple and classy, and afterwards Jeff and I walked through the receiving line and introduced ourselves to the parental-type folks, saying, "Do you remember the couple in Arkansas that your kids drove down to see get married seven years ago? That was us."

We were definitely remembered, which amused me to no end. We got to the end of the line, and I pulled out my camera and said, "Act normal!" This is normal: 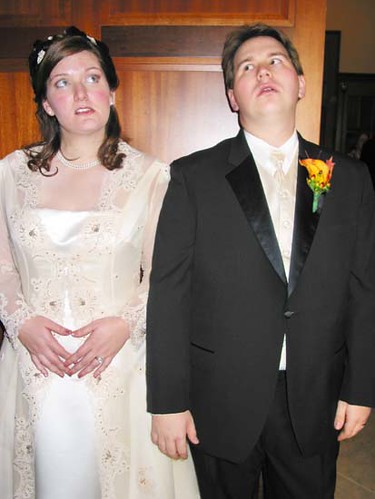 In some ways, we haven't changed much.

So, let me take a second here, and say this.

I know you two will see this eventually, once you're rested up and life's returned to normal. I feel odd offering you wedding congratulations, because you guys have already been together a decade—a decade already, before either of you are thirty!—longer than Jeff and I have even known each other.

I have never known you when you were not together; not serving as each other's punchline, gofer, better half, companion. This wedding really and truly was a formality for you; if being married is, as everyone tells me, about throwing your lot in with another person and making a single shared life, you guys have been married for a lot longer than Jeff and I have.

It was our pleasure to be there to witness the formalization of what we've known for a long, long time: you guys are good for each other.

1) Getting married the weekend of Halloween and having a costume party as your reception? Brilliant!
2) Steph, you were totally hot in the dress, yo. :)

For those of you who don't know, Dan is the person who gave me the nickname 'domesticat'—oh, about a decade ago.

On 30 Oct 2005, canspice said...
Holy shit, Dan and Steph got married?! Congrats to the both of them!
On 31 Oct 2005, colter said...
What is up with all these October/November weddings? My second one is this Satruday. Last Saturday was the other Amy.