You never know when you're going to fall in love. Well, I wouldn't so much call it 'love' as I would 'deep and abiding lust.' 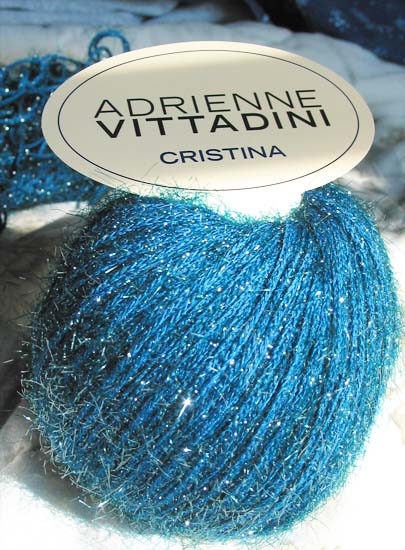 Any knitter who tells you that there is no such thing as 'crack' yarn is a lying sumbitch who is desperately trying to cover up his/her addiction. In this world, there are workaday yarns, yarns you use to construct beautiful but unfussy garments; garments that don't attract a moment's notice. Then there are yarns that, once spotted in a store, never leave your mind, quickly ascending ranks to the level of obsession.

I spotted one of those yarns nearly a year ago, back in Colorado. I was nosing around Lambspun in Fort Collins, in the dead of winter, and I stumbled across a ball of … something … that I'd never seen before. Even in the dim light of the store, it had a luminous quality that I couldn't even explain.

Luminous it might have been, but it was also $17/skein and I was already over budget for my trip, so I put it down. I walked through the rest of the store, before coming back to the yarn and fondling it again. I realized that I was verging on public molestation and decided that it was time to stop before someone caught me actually drooling on the yarn.

Wrong. I'd apparently fallen in love with a yarn that nobody in the States had even heard of, much less actually carried for sale. When I searched for it, I turned up (at the most) four websites, all of which had such dark and ugly photos of the yarn I understood why nobody was talking about it. I wanted to shake them and say, "Knit something with this! Take photos in sunlight! They'll buy, I tell you, they'll buy in droves!"

Eventually, I got smart. I put a watch on ebay for this particular yarn. Every now and then, I would see a skein come available, but it was not the fabled color #4, that magnificent deep teal blue. Then one day, four balls of it came available on ebay. I sniped that auction faster than you can say "bad evil domestikitty," and ended up with 4 balls of yarn for about $10 apiece.

Stats for everyone else: it's a teal blue yarn. If you turn a knitted swatch to the side, you can see the teal blue viscose threads making a halo around the main yarn, which is composed of multiple strands, like a rope. (Unlike most yarn, the strand doesn't seem so much 'spun' as 'woven,' giving it a slight stretch and a very smooth, non-fuzzy appearance.) Viewed straight on, the finished fabric sparkles like Christmas lights. 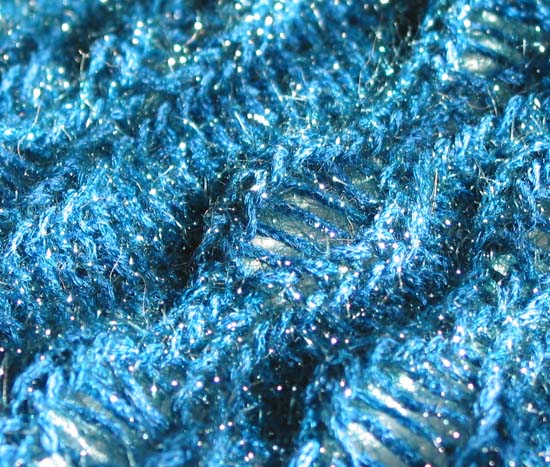 Until I turned my work sideways for the first time, I was convinced the yarn contained metallic threads. It does not.

Once the yarn was inside my home, I considered it above the age of consent, and bent it to my will. It seemed willing, and hey, Officer, it was wearing a short skirt and was asking for it!

The junkie had her fix. The d.t.'s stopped shortly thereafter.

A shawl, I figured. I've been intending to make a few, for different occasions, since over the past year I've used my weight loss to justify a change in wardrobe. These days, single-color dresses are the norm for semi-formal and formal occasions, and having a few different good-quality shawls/scarves on hand works wonders for this magical adult thing called "looking well put together." In other words, not showing up at your friend's wedding looking like you pulled on the first thing in your closet that fit and didn't require ironing.

(Rule one: always make sure that the little black dress is within reach and ironed. Faking adulthood is little more complicated than an understated splash of makeup, a little black dress, and a good pair of shoes. Don't let anyone tell you differently.)

(Rule two has something to do with never starting a land war in Asia, and is irrelevant to this discussion.)

Meanwhile, I kept talking to the yarn, and curling up with my pattern stitch books at night. Something would come to me. It had to be openwork, to let those lovely nonmetallic threads catch the light. Lacy and stretchy wouldn't be bad, and a pattern simple enough for memorization wouldn't hurt.

I ended up with a version of a vertical drop stitch, and ended up agreeing with the writer—(tune out if you don't knit) this stitch looked much better and cleaner if, on the rows where stitches were dropped, the knit stitches were knit twisted.

(Tune back in, non-knitters.)

I got halfway through the project before I realized I had unwittingly chosen a pattern and a gauge that meant I was essentially knitting peacock eyes for motifs. Wait, no, I didn't say that—it was planned! Planned from the start, I tell you! I saw the color and thought "peacocks!" and searched the web tirelessly until I found a stitch pattern that could bring my visions to life.

Since none of you are buying even a word of this twaddle, I'll stop. I can't really blame you. I'm not buying it either. But, as coincidences and luck and yarn addictions go, it's not half bad.

I even have a skein left over.

On 8 Nov 2005, rarityfirefly said...
OOOh... please take a picture of the whole piece once complete.. It looks amazing :D:D:D

On 8 Nov 2005, domesticat said...
Oh, it's done. I just can't figure out how I should block it, so it's still scrunchy around the pattern stitches. The care label says dry clean only and specifically not to steam it, so the two obvious options... 1) wash, then pin flat to dry 2) pin to ironing board and use steam from a hot iron ...are right out. I should probably consult the knittyboard. I bet I can find something there.
On 9 Nov 2005, Tialessa said...
That's freaking GORGEOUS! Now you have ME looking for that Christina yarn...
On 9 Nov 2005, domesticat said...
If you definitely want something made of it, your absolute best & sanest bet will be to contact duckie or Jake. Lambspun is in the town they live in, and it's right across the street from the Wal-Mart. Assuming Lambspun still carries it, they can go in & get it. Getting a friend to ship you yarn is almost universally cheaper than paying shipping to a yarn company. For some reason, most yarn shops seem to use UPS for packaging, while friends will recycle a padded envelope and send it first class or media mail. ;)