Coming home from my mother's wedding, with thoughts of Washington and Arkansas and Alabama mixing reluctantly in my head like oil and water, the thought hit me. Last Q standing.

I'd managed to find a close-enough relative to whom I could toss the question to with some degree of nonchalance, though I think I knew what the answer would be all along: "Yes, she's planning on changing her name after the wedding."

It is a learning experience for me. For we were four, in amber, and we were done; though my sister married and had a son, and I married and had none, we were still at heart those four. Subtract one for cancer and we were three; my sister having given up the letter long ago but my mother and I still starting our surnames with the familiar Q. Now it is just me, and we are not three. We are some indeterminate number I have not ascertained yet. We are a mother, two daughters, a new husband, three sons, the five people those children married, and five blended grandsons. I suppose that makes us seventeen, and I am simultaneously the most distant one and the only one who held on to a name that has melted away over time. I do not know if that makes me an individualistic sentimentalist or a champion of lost causes. 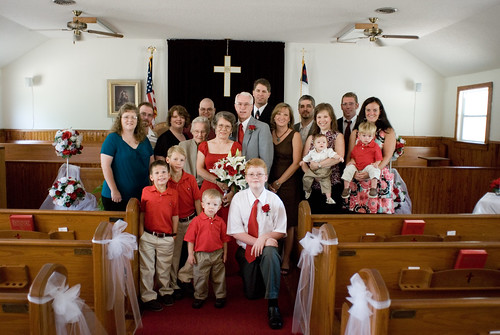 I am still trying to sort out the idea of stepbrothers. I said as much to the tallest one, at the reception, when I shook his hand before we drove away: "I suppose we are ... related now?" It was said with amusement and because it was far more socially acceptable to say something wry than it was to ask the indelicate, pressing question: "Is this as utterly weird to you as it is to me?" Did you, too, allow your idea of family to crystallize after one of your parents died, and find it a little odd to imagine reshifting your parameters to include sisters, which you've never had?

It is not so much a secret in my life that I always wished for a brother growing up, but since geekdom is so overwhelmingly male it has meant I had no shortage of adoptable fauxbrothers with similar interests. In many ways, they became my family in interest, though not in name. I now find it deliciously and amusingly odd that I actually do have some real ones now, if I decide to tiptoe closer and make myself part of their lives. 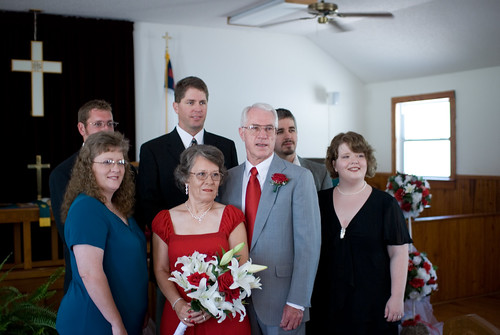 View on Flickr
at , Tull, Arkansas, United States by domesticat.

That is the decision, of course. The need of it stomped through my head like elephants as we prepared for the wedding ceremony. Would I choose to remain the outlier, She-Who-Lives-Elsewhere, or would I pile chance upon chance -- that the mother I wasn't terribly close to would have married a man whose grown children I've only met once might turn out to be the kind of people worth driving seven hours each way to get to know? Realistically, it is unlikely, but I can understand why my mother would wish. They are there, and I am here, and the symbolic decision of hyphenation stands. I took the name I was born with, shook it together with someone else's and made it my own -- and made this life in another state my own. Life rarely lets you loop back to give glimpses of what would have been, had you made different choices. I had a day of it, and it told me what I needed to know: I will always wonder a little at what it might have been like had I stayed, but my choice was the right one for me, then and now.