I finished the top for Pentagon papers tonight. I don't have any photos, because it's dark and it's late and it's Friday and ... do I really have to make more excuses here?

I need to flip the quilt top over, trim any seam allowances that are too large, and then press it ... but of course, pressing it means re-filing all of the fabric that I've pulled out this week to finish PP. It does seem like every round of tasks comes with seventeen codicils these days, but it is what it is.

I'm actually mourning the lack of more pentagons to make -- I never thought I'd say it, but life in its current state is often a lonely and solitary beast, and those pentagons have kept me company in a lot of strange places. I toted this project to ...

This isn't the life I've wanted, but I took the spots and scraps of time -- the flights, the intermissions, the waiting periods -- I called "the spaces between when life was happening" and made something tangible out of it. It made me look silly and obsessed at times, but those collections of 5-15 minutes here and there, plus a heavy, concerted effort after returning home, turned those empty spaces into a warm and comforting gift.

During my Boston on-boarding time, I looked forward to getting back in my room at the end of the day. I'd put on a TV episode and sew; in the three weeks I burned through an entire season of Torchwood and a season and a half of Lie to Me while working through two quart bags of fabric pieces.

I'll be sorry to see it go, but there will be other projects. 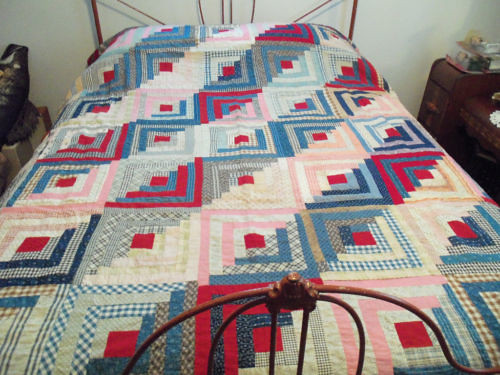 Scarlet will even be staying in Huntsville! How's that for a change?

Alas, she won't be the next quilt, though. Miss Scarlet's been waiting about fifty years; she can wait another few months.