The story: I was fabric-hunting in the Petticoat Lane district in London, where there's a street of nothing but African fabric shops one after another, selling 6-yard lengths of what's variably called "dutch wax fabric," "african wax fabric," etc. The marketplace looks like this, with racks and racks of clothing available for sale out in the street, and wax fabric storefronts on both sides of the street: 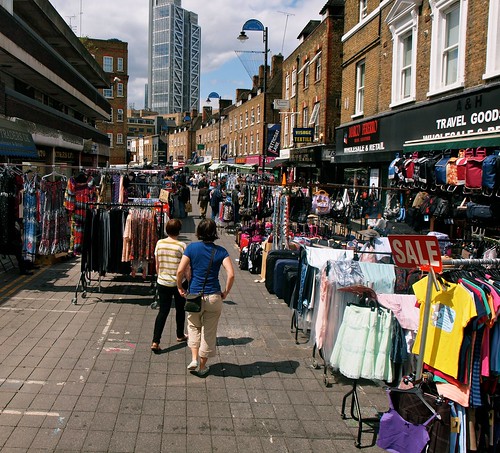 Essentially: the idea of batik, as developed in Indonesia, as appreciated in West Africa, but most frequently made and exported by the Dutch. It's sold in 6-yard (or 6-meter, I can't remember) increments, because that's how it's produced. You simply can't buy less of it at a time.

Jacob will remember this day, because he was texting me at the time, but this was the day of me striking out in store after store after store. As any quilter will tell you, we work with bits and scraps of fabric. For me, a fat quarter of fabric (a way of cutting a yard of fabric into fourths to get a more usable piece, rather than a long, skinny piece) is about all I'll ever need of most fabrics. A half-yard is a luxury. A full yard is me saying I WANT TO COMMIT TO YOU, BABY.

So, your scene: your intrepid, massively footsore Amy is stomping around Wentworth Street. This is notable because I was (pick any or all: blue-eyed, Caucasian, American) and I could not go into a single shop without bracing myself for lots of questions, because there was no way I could fake Belonging There.

I got really good at smiling shyly and acknowledging that I was a quilter. Sometimes I said "patchwork," since that term seems to be more prevalent in Europe, and most of the time I got nodded at and left alone.

So, I was hunting for commitment fabric. Something I was willing to take a LOT of home, because ... again, nothing less than six yards. Store after store, I'd either strike out, see nothing I loved, or find something I liked and then learn that they were cash-only and no, there weren't any ATMs around.

Then I found something that made me say, "Baby, I'll commit."

It was mine. It was going to be mine. We were going to make happy, bright, primary-color quilts together. It drew my eye, I touched it twice in the store (if I come back to it twice then you know I'm really wanting it) and finally I decided that yes it would be mine while I was chatting with the owner. I took it to the front desk .. and their credit card machine failed. FAILED, I tell you. The owner was crestfallen, and even tried running his own credit card. Nothing. He knew he'd lost the sale and I knew I'd lost out on the fabric. In exasperation, I took a picture. 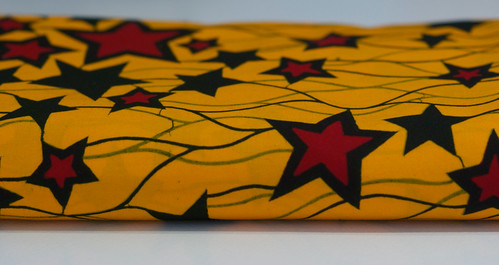 The one that got away (updated Oct 2012)
by domesticat.

I thanked him for his time, apologized for the frustration, and stomped off in a righteous huff to buy yet more stamps, because as a few of you can attest, I singlehandedly may have kept the postal services of a few European nations solvent during my visit.

I didn't say anything about it to anyone else, but ever since then, I've been a solitary hunter, scouring stores internationally, hoping, just hoping. Given that it was one of the more expensive fabrics I saw that day, it pointed to one of the higher-end wax print fabric makers whose names I knew, and I had a vague memory of maybe, maybe? the shop owner saying that it was a new-season fabric. I hoped that my memory was right, and maybe I was just hunting for fabric that hadn't appeared online yet.

Vlisco's "Funky Grooves" collection was launched in late July of 2012, and there it was, front and center:

The pattern name is "Small star" ... and yes, as soon as I save this post, I am about to order it, because now not only was it a fabric I fell in love with in London, and missed out on, but it's the little yellow lost love that I found again on my birthday.

I hope you all love it too, because the minimum's still 6 yards, and unless I turn it into a quilt back, it's going to be showing up in my quilts until the end of time.

An aside if you're in London and thinking about visiting this area: take the tube to the Aldgate East station. (The Aldgate station will do as well, but you'll need to tweak the walking directions a little. You're a big girl. Look it up on a map.) Head west on Aldgate High street very briefly, and then turn right onto either Old Castle Street or Goulston Street. Walk until you hit Wentworth Street. If you find yourself saying "I think this is a street but there are a lot of vendors selling fabric on the road" then you're in the right place.

Walk up and down Wentworth. Explore the side streets. You'll lose count of the number of shops you hit up. Bring cash. Not only is there a street food market nearby that smells amazing, a lot of the shops only take cash. Learn from my pain.