Begin at the beginning

Perfectionism will get you every time. 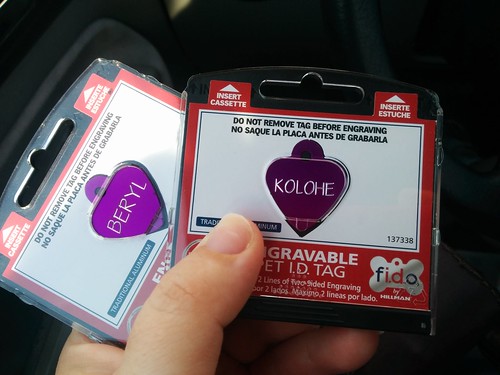 Tags for a new start.
at Center, Portland, Oregon, United States by domesticat.

I decided to take the leap, and change his name, just a little. A little digging turned up that the orange tabby's name was spelled wrong; if I really wanted it to be the Hawaiian word for 'mischief' then it needed to be 'kolohe,' not 'kalohe.' I rationalized that the cat wasn't going to give a damn about the unstressed vowel as long as I fed him regularly, so I got the name tags engraved accordingly and changed the name of the flickr set.

The kitties arrive tomorrow morning. From watching them, I expect Beryl to be a tiny inky ball of terror; she was a feral-kitten rescue and spooks easily. The shelter's confirmed that she'll do better in a calm environment as long as she has her tabby teddy bear. She's never known any home other than the shelter, so a house with just her (and her tabby boyfriend) will be a completely new experience for her.

Kolohe's getting a second chance. He had a human, once, but his previous owner died some number of years ago, and Kolohe ended up in the shelter, where he immediately cozied up with Beryl.

I'm going to work from home tomorrow to keep an eye on the little guys. They're likely to be too terrified to do anything other than hide. I'll be quiet, work a lot, and if they decide to peek out into the world, I'll be there to reward them.

My computer still has a rotating background, and photos of Edmund and Tenzing still pop up. I have thought about them a lot in the past few days, how I've wished I could've seen their reactions to the big windows and the courtyard, how they would've liked the warmth of the radiators. I think about how they treated scritches and cuddles as their absolute right, and wonder if either of these two will ever be like that with me. There's no way to predict the path; it can only be walked one step at a time.