It goes without saying that there's been a change or two around here. Even the definition of 'here' has changed.

Those of you who have been in contact with me over the past six months or so knew of the life changes that I was unprepared to speak of publicly on this blog. Jeff and I agreed to divorce some number of months ago, and I immediately began to put plans in place to relocate to Portland, Oregon.

Back in December, I happened to be in the right place at the right time, and snapped up a condo in a beautifully restored 1945 apartment building. It has wood floors, a small but well thought-out kitchen, a bedroom for me, and a room for sewing. When I bought it, I imagined Edmund living out his remaining years on the windowsill, watching the birds gather around the fountain in the central courtyard.

It wasn't to be. The week I came home from Australia, we lost Edmund to the same cardiac issue that killed Tenzing a few months earlier. I expected to bring an elderly kitty with me when Jacob and I drove cross-country, but I instead brought two sets of ashes to scatter at the ocean.

Jacob helped me hang star lights in the living room. My beloved blue rocker now has a prime seat in front of the television. My couch is a hand-me-down from a kind coworker. I've used my china and crystal more in the past week than I've used them in the past few years. I am now a train commuter, and own a monthly train pass. I've learned what a radiator key is.

Amidst the grief for Edmund, I decided to familiarize myself with the animal shelters in Portland. As a result, I looked at a lot of photos of kitties that needed nothing more than a good home, and snarled quietly at them, "I want what I had again, dammit." I knew, though, that no amount of time or grief could give me Tenzing and Edmund back; the Brothers Fang were no more.

But there was a photo. An elfin little black female standing over a big, burly orange tabby. 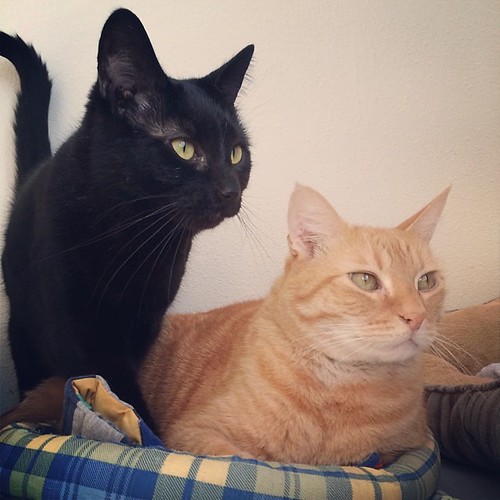 I thought, "are they...?" and sure enough, they were a set. A non-littermate bonded pair, both adults. Beryl, the girl, was six years old and a rescue from a litter of feral kittens; Kalohe, the tabby boy, was nine and in a shelter because his previous human had died. They met in the shelter and it was apparently instant love; there was no separating them. Kalohe was more immediately outgoing and might have been adopted out quickly, but the shelter decided they would rather keep him long-term rather than separate him from his beloved girlfriend. 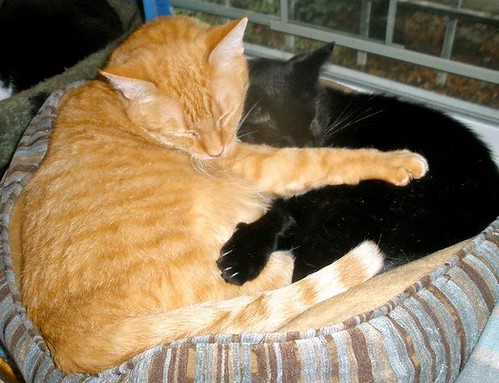 How we sleep.
by domesticat. 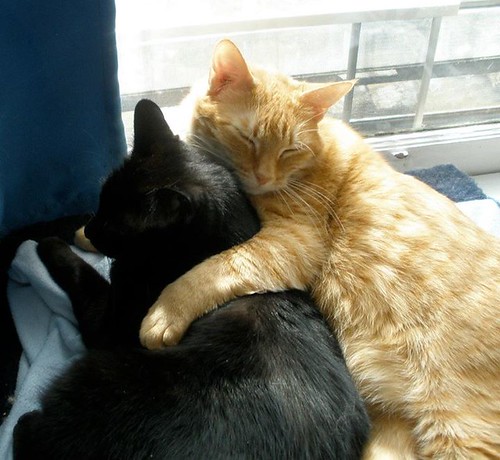 How we cuddle.
by domesticat.

So I met them, and I asked them the all-important question: "Would you be willing to adopt me? I'm an orphan, like you." By the end of the visit, I knew I was their human. 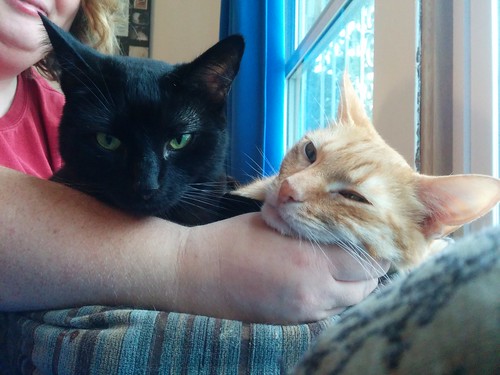 I have a tabby boyfriend. Get your own.
at Center, Portland, Oregon, United States by domesticat.

So, for now, I'm working on clearing the box clutter -- affectionately nicknamed Mt. Cardboard -- out of my new place, finding homes for my things, and preparing for the invasion of two new kitties. They've been waiting for a forever home for three years, and I hope I don't disappoint.

Such a nice story - and I

Such a nice story - and I love that you were ready to open your heart to a loving pair that needed to stay together. Lovely cats!