The year books came back to me

With just a couple of days left to go in the year, Alison Bechdel's Fun Home brought me to my unspoken goal of reading 50 books this year. My ability to focus on books has been virtually nil since 2010, and I remember, earlier this year, how keenly I felt the loss. I was once a person who defined herself by her bookshelf, both of books read and books yet to consume, and that part of my life had stopped cold.

Jacob went with me in the first week I was in Portland; I frog-marched myself to the library and not only got a card before I had an Oregon license plate, and managed to sweet-talk the librarian into setting it up with the version of my name that wasn't quite legal yet. ("If you don't, I'll just be back to change it in two weeks" seemed to do the trick.)

I consider the 50-book total more notable given that I didn't start the first book until April 28, and I didn't finish it until May 10. It's entirely possible that after a long reading hiatus, Paul Theroux's travelogue of China was not a good first book to start with, but that's what I chose. Something happened by the end of May, though: while it's true I had become a train commuter in late March, giving me 40 minutes per workday to devote to reading, it took until the end of May for the zeal for books to kick back in.

Suddenly I was reading again, and not just reading, consuming books in a way that I can't remember having done in years. I wanted to be reading, made time to read, and in fact was often a little sad to hear my train stop announced because that meant the end of the reading time. To be fair, though, I frequently would sneak in a couple more pages each morning while waiting for my building's slow elevator, and while waiting for it to deliver me to my company's floor. 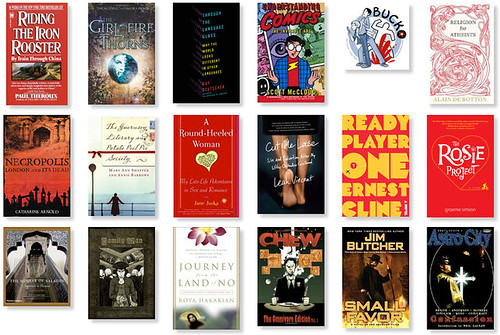 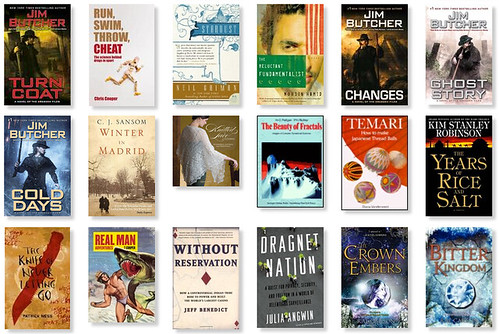 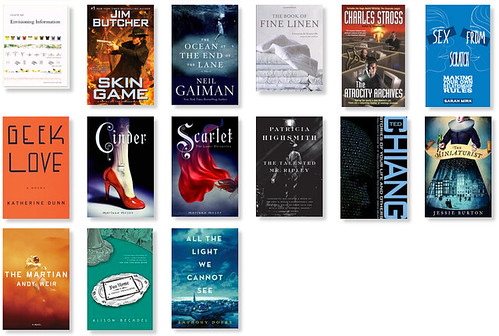 I'm grading myself a bit harshly. I had a goal of finally getting caught up on Jim Butcher's Dresden novels, but I wasn't sure where I'd left off, years ago. I opted to start rereading several books before Small Favor, which was the first new-to-me book in the series, so I started closer to book 6.

Overall, though, I'm pleased. Noah's a longtime fan of graphic novels, so he's recommended several graphic novels to me that I've enjoyed this year. That's a genre I've felt ignorant of for a long time. The same's true for the recent rebirth of YA (young adult) literature; my ex-coworkers the teen librarians have provided an excellent reading list I'm still working through. I've also spread my reading time through craft books, non-fiction, and general fiction. Thanks to Noah, I'm starting to pick up some books about gender and sexuality. I worry sometimes that my love of science fiction will keep me from reading broadly, but reading through this list I can see that isn't the case.

In 2014, I also acknowledged a silly (in)action I've taken, and will continue to take: I am holding off reading the rest of Iain Banks' Culture novels, and not because I don't like them. I love that series, and I was so angry and sad when Banks died in the prime of his writing life. I have the final three books in the series left to read: Matter, Surface Detail, and The Hydrogen Sonata. Once I read them there will be no more to come, and I have the rest of my life to get used to the idea of living in a world with no more Culture novels to read, so why should I hurry?

Maybe I'll change my mind in 2015. Maybe I'll decide to devour them in three smacking gulps. More likely, though, that I read Matter, and save the final two for other years.

What matters, though: I'm reading again at last.

Update, December 31: Anthony Doerr's All The Light We Cannot See finished up last night, so unexpectedly I hit 51! I've updated the list and the accompanying image.