We drove south from the Grand Canyon through Flagstaff, marveling at the random slashes of aspen through the pines of Cocanino National Forest, making our way toward Sedona. There's no quick way to get to Sedona from the north, as far as I know; to my knowledge, the only way to slide from one to the other requires a jaunt through Oak Creek Canyon. 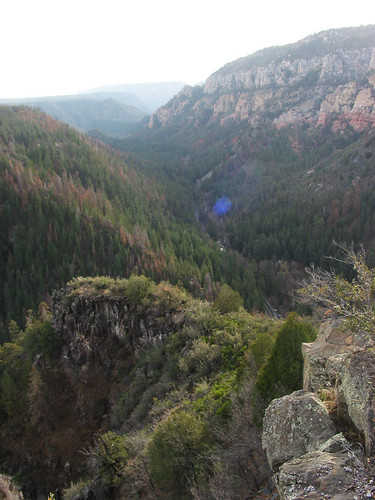 Oak Creek Canyon overlook
by domesticat.
We pulled off at the overlook, grateful for the chance to stretch legs and find a bathroom. On our way into the women's restrooms, we noticed a sign that indicated the bathrooms closed at 4:30 p.m. each day. This seemed normal until we actually used the restrooms, which turned out to be little more than ... shall we say ... glorified outhouses? ("Here. Sit on this, but don't look down.") I didn't look down. I didn't linger, either.

There were sinks to wash our hands in afterwards, so we knew it was theoretically possible to bring water up to this particular building. We were just mystified as to why they chose to stop after only putting in sinks.

I did my best to take photos from the overlook, even though I knew from the outset that I needed to have either a zoom or a wide-angle lens to do the canyon justice, and that I had neither. I snapped several photos, we gave the not-quite-native-American craft sale a bit of a miss, and we headed back to the Jeep.

Oak Creek Canyon is a series of switchbacks, with a posted speed limit of fifteen miles an hour and a realistic one of a bit less than that. We crept down the canyon at a crawl, seeing the road we'd just been on continually rise above us like an endless ladder of asphalt. It was dark at the bottom of the canyon, with what little sunlight filtered down below being choked out by the trees that sheltered both sides of the road.

The houses began to appear as the rocks turned red. I commented, and cheered, and even purred a little if you listened closely, and Kara smiled at me and said, "Oh, Sedona's far better than this." I thought perhaps she was kidding, until the road threw us out the far side of the canyon and all but dumped us into the town of Sedona... 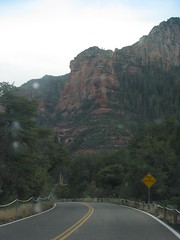 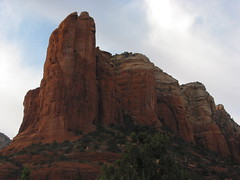 Forget purring. I was gawking, all semblance of my normal anti-tourist nonchalance gone in exclamations. As she drove, Kara asked me to pick a few of the better-known rock formations from our guide, so that we could decide what we wanted to see first. I looked at the sun, slowly settling down to bed in the west, and realized that we had a limited amount of daylight left. We had only one day. If I wanted to see it, it had to be seen within the next two hours, so I chose carefully.

I picked three formations, with the intent to spend the sunset photographing Cathedral Rock. 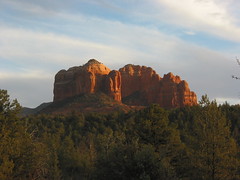 Cathedral Rock - 2 of 4
by domesticat.

We hit the first one, on the north side of town, and then began navigating southwest through Sedona to get to the small park & hike area that looked to be the best place to photograph Cathedral Rock. After a couple of wrong turns, we finally got on the right heading. On our left flashed a sign as we drove by: 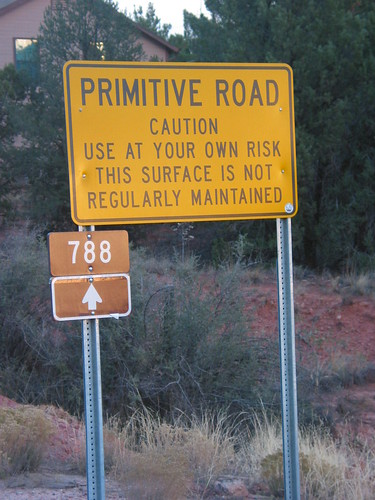 "What the hell is a primitive road?" I asked after we passed it.

"Dunno. But we've got the Jeep. We might just have to go look. But first, let's go get photos of Cathedral Rock. We're not going to have too much daylight left." We continued heading south, toward the park, but quickly became disgruntled when we realized that not only was the vantage point not terribly good, but that we'd have to pay five dollars just to park.

I wasn't interested. I told her this. My adventurous spirit got called into question. I don't think she actually called me a chicken, but I knew she was right. If we didn't go down that road, we'd always wonder what was there.

We drove back, and headed down it; it was a one-lane gravel road, in far better shape than the sign might have indicated. "Primitive road? I bet you'd agree that there are plenty of roads in Tull that are far better than this."

A couple of minutes and perhaps half a mile later, I began to wonder if there was anything of any use at all on this road...and then we turned the corner. There it was. Cathedral Rock, with perhaps the best view from anywhere inside the city. Kara pulled off to the side of the road, and I bailed out to take photos in the slanting, late-afternoon light.

As I did, a white van pulled up. Kara waved. I waved. They parked right behind us. I was a couple hundred yards away, walking fast down the hill, determined to get at least one good photo before being asked to leave. I kept walking and taking photos while Kara put on the charm.

By the time I got back, both sides had established friendliness. They were locals, and they were amused that through a tiny bit of adventuring, we'd managed to find what they, too, considered the best view in the city. I walked up to say hello, shook hands, and prepared to walk back, and then had a thought. Why not ask? I went back to them, put on my best Stupid Tourist smile, and said, "I really wanted to get some good photos of tonight's sunset. Any suggestions on where should we go?"

They took our map and pointed to a place near the airport. A 'vortex,' they said. "You can feel the energy out there. Just follow this road, and you'll see cars parked along the side of the road. You'll know where to go, but you'll have to hurry. If you leave now, you might just make it by sunset."

We headed back northwest, back the way we came, and headed to the airport, near the center of town. We realized that we were headed up, up, up - up to a view that might, actually, live up to its recommendation. We found the place where the tourists were pulling off, and realized that we needed a Red Rock Pass (or somesuch thing) to park there. Such passes cost money, and so far, we'd managed to find the best shots at places that didn't require money to park.

Kara looked at me, and we nodded. "Let's go just a little farther. Let's see what we find."

We rounded one last hill, and there it was: the highest point. With free parking, no less. We parked, and I stood with the rest of the tourists and marveled at what had the promise of being a truly memorable sunset. But I couldn't get a clear shot. I looked down, and realized that while there was a fence about twenty feet down, the way to the fence was clear, nd I'd probably have a better shooting angle there than from the top of the hill.

I walked down. it was better. 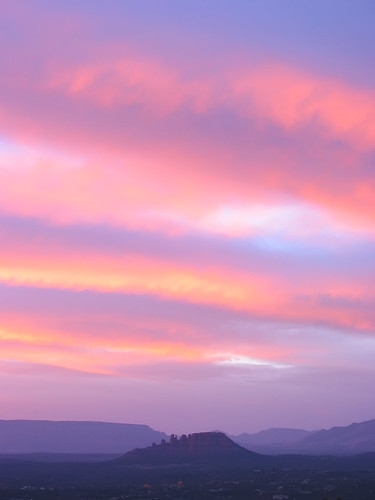 I started shooting as the sunset developed, and marveled at the idiocy of the people at the top of the hill who were madly snapping their cameras at the part of the sunset they could see, not realizing that twenty feet down, there was a far better view.

Was there 'energy' at this vortex? I don't know. All I know is that it was, indeed, possibly one of the most spectacular sunsets I have ever seen. 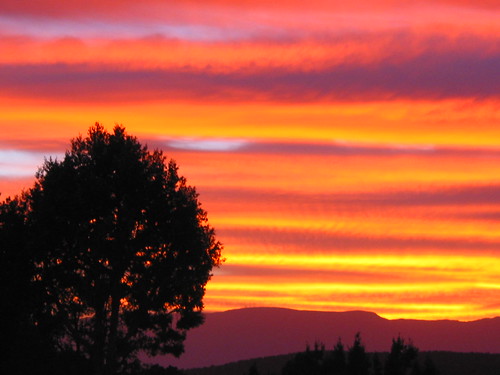 To see it, and Sedona, and the Grand Canyon on the same day... Words fail. Those of you who know me well know how rare that is.

When the sunset was over and I was nearly out of space on my flash card, I nodded to Kara, indicating I was ready to go.