The squeak of bedsprings told me Jeff was shifting about for a more comfortable reading spot on the master bed. Their familiar squeal is one of the few sounds that transmit reliably through the walls of our house; from my blanket-wrapped perch in the reading room I could tell what was going on without question or movement.

When I dropped it in, the spoon clinked against the glass. Another cup of Saturday tea, chestnut and opaque from half-and-half and sweetener, sacrificed to the literary gods. Naptime, perhaps. Tired.

I've been a lot of that this week. More than I've casually admitted. More than I've wanted to say. Two major medical procedures in the course of eight days took a lot out of me. I don't like my fallibility, like acknowledging it to others even less, and like acknowledging it to myself least of all. I expected faster recovery from my surgery—after all, my mind says, it was just laparoscopic surgery, so quitcherbitchin, girl, and get back on with life!—and have been frustrated at my slow resumption of my daily activities.

When I say that I'm four days post-op from a laparoscopic tubal ligation and that I'm not working out again yet, I say it with a degree of frustration. I only wish I was kidding. Were it not for the truly spectacular abdominal bruise pattern I'm sporting right now, I probably would've tried to cajole myself into at least a swim by now. (I feel there are some parts of my body that should not be combinations of banana yellow and plum purple. Nevertheless, I have a couple of body parts that are currently a charming combination of those two colors.)

Suzan: …how's the recovery going?
me: Not bad. I'm still sore - I wondered why today and then I looked - I have some pretty significant bruising.
Suzan: No doubt. You've been roto-rootered.

Nevertheless, my healing is progressing at an excellent pace. My incision appears to have been sealed with surgical glue; I can't find any evidence of stitching in the 1.5cm incision I have in my navel. I scar very easily, but what little scar there is will be well-concealed by its position. I stopped wearing a band-aid to cover it two days ago, once elastic waistbands stopped bothering it.

The truth is that the time off is a good thing. I've had some time to knock an unusually-frank dinner conversation with a friend around in my head, and the more I return to it the more I realize how pertinent, how spot-on, the conversation was. I've thrown everything I've had into physically transforming my body in the past fifteen months, and I must begin the process of asking myself at what point I will consider myself "done."

I'm no longer sure.

My body isn't being terribly helpful; my inability to make my weight budge downward since January has as much to do with my resumption of weightlifting as it does some other currently-indefinable x-factor. It is holding steady, fighting and screaming, at around 195 pounds. At this weight I am a solid size 14, a size at which friends are starting to ask why I'm considering going further.

The differences are impossible to ignore. A 2001 photo of me eating beignets at Café du Monde in New Orleans is typical of me in that year, and stands in sharp contrast to a photo of me, approximately fifty pounds lighter, taken the weekend of April 1 in Atlanta with Suzan and Brian. 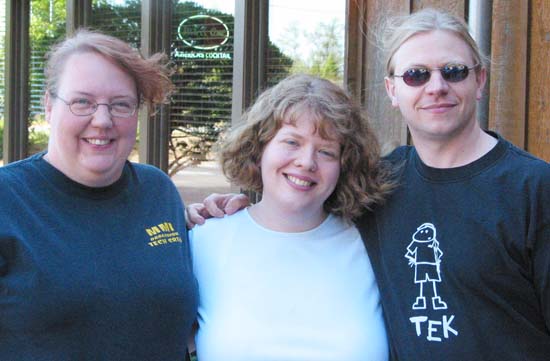 I'm willing to admit that I'm infinitely harder on myself than any of you will ever be, but I'm also the one who sees me naked in the mirror every morning, so I believe some degree of my self-criticism is justified.

Let's face it, kids. No matter my weight, my looks aren't ever going to be my major selling point. I've wrested an average degree of aesthetic respectability out of this body by dropping a good bit of weight, getting a better haircut, and swapping out coke-bottle glasses for contact lenses. I understand how to get the most out of what I have, and am learning to use a good-quality sheath dress and understated makeup to fake some respectability (and even a touch of adulthood!) … but I checked the dictionary and the words "ravishing beauty" still aren't next to my entry. Nor do they show any sign of being added into the definition of 'domesticat' any time soon.

So how far do I want to take this process? How much self-denial and penance is enough for me to say, "Screw it, let's walk away from weight loss and move on to maintenance"? How do I know it's time to start asking these questions?

I am strong, not tiny. Curvy, if you're being euphemistic; judging by appearances, I got in the lines for "boobs" and "butt" at least twice, if not more. (Apparently the party snacks offered in that line were pretty tasty; I kept coming back for more.) I like throwing heavy weights around, but I dream of the day that I wear a bra with less than a DD cup. I look pretty silly in foofy lingerie—photographic proof is not forthcoming—but make a tightly-fitted shirt into an object of near-blasphemy if I'm not careful.

When I go for my post-op consultation in a week or so, I'm probably going to ask my physician to do some semi-routine blood tests. I'd like to verify, once and for all, that my struggles with weight loss over the past few months don't have a base in hormonal fact. If I am working out regularly, diligently, and strenuously while controlling my diet and the weight doesn't want to come off, there are two potential reasons. One reason: there is another factor inhibiting my weight loss. Another reason: my body has reached a set point, and I should give some thought as to why.

From looking critically at my body, and asking myself what portion of it I can legitimately exercise away, I believe I am capable of losing, at most, two more dress sizes. The further I go, the more I begin to think that a 10 is likely to be my smallest maintainable end result.

A day or two ago I realized I was angry at myself for not 'making progress' toward my goal of finishing the weight loss as I was convalescing. I was disturbed by the vehemence of my frustration, and it made me realize just how accurate my friend's criticism was: am I living, or am I putting aside my life for a period of time that I stubbornly refuse to define, saying only that I'll start my life back up 'when I'm done' and when I feel I've done enough penance to deserve it?

That's when I said to myself, "Two medical procedures in eight days. Take the pain pill, eat the sandwich, and shut the hell up. This is ridiculous. When you're healthy and healed up, you'll resume running, yoga, swimming, and weightlifting. In the meantime, for the love of God, look at the length of that list! The little red size-12 dress will wait in your closet until you're ready for it."

What's enough? 70% of the original goal? 80%? If reaching my original goal is truly unfeasible or unwise, can I learn to accept better health and greater activity levels as substitute goals? Can I learn to look in the mirror, to look at the photos, and honestly accept the images there?

I don't know, but it merits thought—and perhaps another cup of tea. So much for my planned Saturday afternoon nap, I guess.

On 17 Apr 2005, gfmorris said...
The bitch of introspection is that you're still on the inside.
On 18 Apr 2005, Tialessa said...
I guess you'll have to do some more thinking about at what point will you be happy. You can easily kick my butt at swimming, weights (both weight and repetition), and running. Perhaps you need to get your trainer to measure your body fat percentage - that may be the next thing to do instead of looking at a "perfect weight" or a "perfect size".
On 18 Apr 2005, domesticat said...
Oh. Heh. Maybe I should 'splain what the plan is, actually... Ever since I started working with Val, I've been keeping a spreadsheet of not just my weight, but the measurements (including bodyfat) she's been taking as well. My original goal, all along, has been to hit 25% bodyfat. At some point along the way I realized something: yes, my weight was changing and my bodyfat percentage was changing, but my underlying lean mass shouldn't be changing all THAT much. So I went back to the numbers and worked backwards to calculate not how much bodyfat I had, but how much lean weight I had. That number has stayed surprisingly steady since March 2004: 129-131 pounds. That's me with 0% bodyfat, which is unhealthy, unattainable, and undesirable. The only time that number changed at all was when I stopped weightlifting and concentrated on cardio, and it dropped to 125 pounds. (I'm pretty sure the reason I haven't lost weight since January is because I started weightlifting again, and have probably raised that number back to around 130lbs.) Once you have that number, it becomes really easy to calculate at about what weight you'll hit your desired bodyfat percentage. For me, it will be around 175 pounds, which means I have right around 20lbs to go to hit that mark. That number still causes me to shake my head: I am, after all, only 5'1", and for some reason that weight just sounds enormous for someone my height. I tend to use my mother as a yardstick, and she is 4'11" and ... MAYBE ... 105 pounds. Let's just say we're built a little differently. :) I really like using bodyfat percentages to determine progress, as it's much more specific than just overall poundage when it comes to determining what type of body mass I've lost. The last time Val measured me, it confirmed what I already suspected - I had managed to lose a bit of weight since she'd last seen me, but some of it was my body getting rid of extraneous muscle mass because I wasn't weightlifting. That was probably a longer answer than what you wanted, but I should've been clearer about this plan all along.
On 19 Apr 2005, Tialessa said...
Well YOU know what you're doing and it looks like you're doing it all right. Now get healthy and get back to it! :D