As I just said to someone via IM: I'm not sure if concert shooting is fun in spite of, or because of, the crappy conditions. The showier performers are constantly in motion. The lighting is either spectacular or terrible, depending on the half-second; low ambient light combined with frequent bright flashes mean you're waiting for those magic moments when light, motion, and melody sync together.

The burn rate of digital photos at concerts is horrendously high. I started shooting concerts because they forced me to think outside my careful-composition box: shoot, shoot, keep trying, trust that you're going to delete 90-95% of what you take but you won't get that magic photo without trying.

Sorting through the mass of photos the next day is depressing. So many missed moments -- when the lights were in the wrong place or the performer moved the wrong way or a mic stand was in the way -- but it's worth it for the deep, quiet pleasure you get when you see the photos that got it absolutely right. 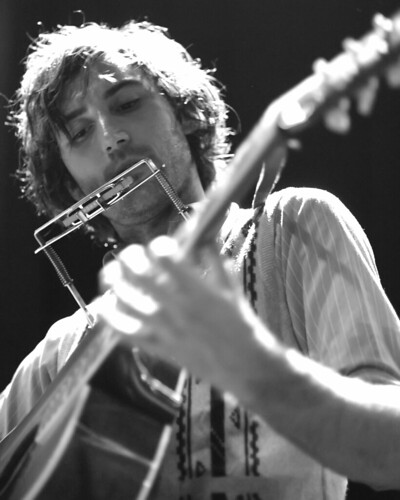 I don't throw away quite that many, but I probably have lower standards. All I know is that the more I shoot, the more I want a better camera to shoot with.

What are you shooting with? I forget what camera body you've got.

I've also been really pleased with Noiseware Professional, a plugin I bought for Photoshop specifically for noise reduction. I typically shoot concerts at ISO 1600 to stop as much motion as possible (see also, mumbling in entry re: crappy lighting conditions) in the hopes of keeping the great colors from stage gel lights. ISO 1600 == lots of digital noise. A careful pass through Noiseware gets the photos closer to what I imagined.

I'm on a definite b&w kick for concert photos, though. It was born out of attempting to salvage better shots from the Okkervil River show, and I really liked the look.

I'm shooting with a Canon 10D.

Yes, typically I'm at ISO 1600, too, unless there's more light than normal. Funny ... when I last shot at Workplay, I was able to get out of 1600 and up as slow as 400 at times. Of course, I also shoot with prime lenses only so I have as much light-nomming as I can. There, I'm trading the likelihood that I'll be out-of-focus for that depth of field as much as anything. That also means that I typically am anticipating moments and shooting in five-to-nine-frame bursts.

[And it's that last that has me wanting a new body, because newer Canon bodies have larger caches and can take more shots at a stretch.]