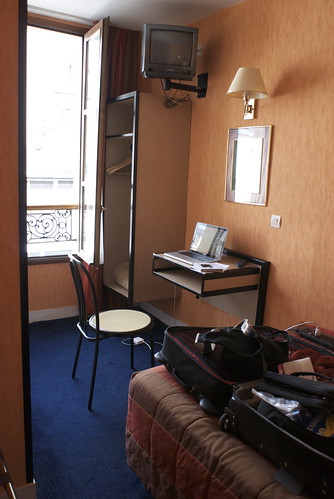 Right now, outside, church bells are ringing.  Light breeze.  Cars are going by occasionally.  Someone had a TV or radio going that was playing church hymns, and it didn't register for me for quite some time that I could actually understand the words, so they were in English.  A woman and man held an animated conversation under my window, three stories below, and as she walked away I heard her sing "Glory, glory hallelujah..." in an accent that could easily pass for a longtime speaker.

Post offices are closed today, except for the one by the Louvre.  I could go get postcards today, but that is madness. The lines are long there, because that is the central post office for Paris AND it doubles as a bank AND it's the place for all the tourists to pick up Poste Restante mail. I will wait for tomorrow, when the post office two blocks away opens up, and buy postcards then.  There are many to send.

I'm uploading a few photos now.  Originally I'd thought of doing museums today, but the more I think about today the more I'm thinking maybe I should take my camera gear and good shoes and just ... photograph.  Lose myself in the city.  I know now what I suspected then: I brought clothing that makes me disappear into the city.

Though I kind of wish I'd brought a t-shirt, then I could wear shorts. 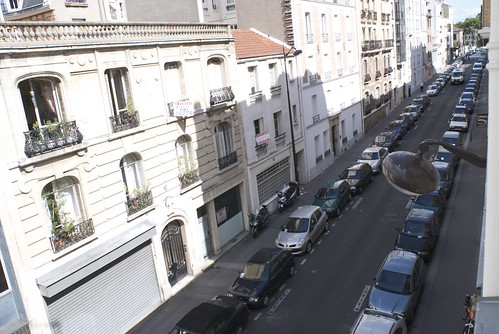 Down on the street, the rolling sound indicates the man I hear talking to a child is pushing him in a stroller.  The child is asking a question over and over:  "Pour quoi, Papa?  Pour quoi?"

Some things are universal. :)