pixels and purls are larger than they appear

Funny how sometimes the things you dread and put off don't even bother to live up to how difficult you thought they'd be.

Databases were like that for me, once; I woke up one day and said, "It's time," and cracked open my books and studied up and about two days later, I realized at least three-quarters of my fear and doubt went away the moment I transmuted worry into action.

I said that for six months, actually. It's rather pathetic to admit that, a couple of weeks ago, I woke up one day under a strangely fluffy and rational cloud and said, "Hmmm, I bet there's an explanation of the theory behind cable knitting somewhere on the web." Thirty minutes later, theory in hand, I had a pattern sketched out and was ready to start knitting.

The first time I tried it, I was - disappointed, almost. When you boil knitting down to its basics, there are two stitches (a knit stitch, and a purl stitch) which are opposites of each other. What is a knitted stitch when you are looking at it on the 'right' (the publicly visible) side of the fabric is a purl stitch when you look at it from the back. Grab a sweater and look at it sometime. If it's ribbed, compare the 'right' and 'wrong' sides, and you'll see what I mean.

So, after ten minutes of reading, the mystery of cable patterns were lost. You might not know what a cable pattern is from the name, but you've seen it on sweaters: intertwined, swirling ropes. I think I expected something complex, difficult; it proved to be quite the opposite.

To make the stitches stand out, they need to be the opposite of the background. The standard way is a solid purled background, with the cables done in a solid knit stitch. Each cable should be an even number of stitches wide, and the frequency of the turning is determined by the width of the cable. A cable that's six stitches wide means that there are two strands of three stitches each, revolving around each other, and a turn should be executed every sixth row. 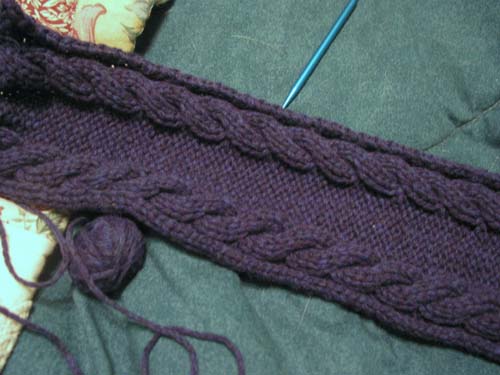 That's it. Opposite stitches. Even numbers. The width of the cable tells you how often to turn. If I could've blown the difficulty of this particular concept any further out of proportion, let me know.

The plans: finish the blue scarf for me. (Yes, gasp, choke, I'm doing a project for myself for a change.) Start up work on scarf-present for a friend; as soon as the yarn arrives, finish up scarf-present for another friend. Take that ball of yarn that's been sitting on my shelf for something like six years and make the modified tam o'shanter I've always wanted. (Yes, the prospect of going somewhere that may potentially be very cold for New Year's has me thinking in unusually practical terms. Don't worry; this sort of train of thought never lasts.)

Been thinking a lot about friends this past week, and especially these past few days. Most of you don't know her, but Susan, my college friend from Hendrix, has been seriously hurt in a freak accident. (Not to be confused with Suzan-with-a-Z, who is married to Brian and lives in Atlanta.) I can't say she's okay, because she's not; what do you say to someone who has survived a horrific, freakish accident but who now faces a daily fight in physical therapy to regain the ability to do many of the things she did before her accident?

Nothing, I suppose, except bitterly funny jokes about how whacking her fiancé with the bone-stabilizing pins in her right hand is a sure-fire, guaranteed way to win any argument.

Neither of us ever bothered to say "It isn't fair." Maybe because some things are just too obvious, and too painful, to ever warrant saying.

It seems like every time I wander into a knitting shop, someone - a person who works in the store or a fellow shopper - ends up confessing to me that knitting is 'therapy' for them. I've always found this need for confession somewhat odd, and I've always wondered how knit 'therapy' works for them.

Most knitters I've met use knitting as a comforting, repetitive way of gaining time to think through whatever's bothering them at the time. For me, knitting is more of a Zen exercise; my mind goes calm and blank, and when whatever makes me, me, returns from wherever it goes, the ball of yarn is much smaller and the pile of finished work is a lot greater. It's not about time to think, it's about an absence of thought.

My wrists will usually ache a bit and my fingers will need a flex or a shake, but sometimes the time out of mind is just enough for things to reshuffle and settle themselves. Sometimes, when I come back from wherever it is I go when I knit, the purls are a little larger than the problems were.

I figure it's worth the cost of yarn. Good thing, because I'll blow through the last of the blue tonight.

Since someone asked, yes, it's another Rowan yarn. Their yarns are just luscious. This is the same company that did Kidsilk Haze, which can only be described as the dark European chocolate of yarns. The blue scarf is made of yarn from their "Cork" label: 95% extra fine Merino, 5% nylon. My next project will be made from the Kidsilk Haze, and yes, the yarn is just as fine and thin as it looks in the photo, and yes, I am insane. Thanks for noticing. 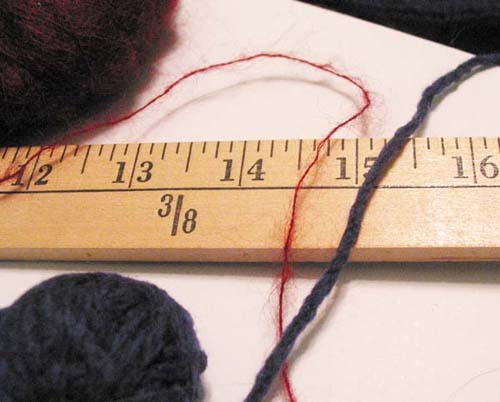 On 11 Nov 2003, tychoish said...
The thing about scarves that generally gets me is that, you more or less have to do them in reversable patterns (ie garter, seed, rib or some variant), and after a while those get tediously borring. I've taken to doing things with fine yarn with bigish needles for a kind of lacy effect. And I've done socks with ones or zeros that I can just fly through. At the moment I have some bright red lopi (islandic wool) and size 7 double points (!!!!), which is certinatly going to be a quick project. So while that yarn looks thin, I'm only going to worry about your sanity if you say you're going to do the project with 00 or 000 needles (do they even make tripple zeros, and if they do, to they bend when you breathe on them?) Anyway, cheers,

On 11 Nov 2003, heather said...
I'll say it again: if you knit cables, I can keep you busy for a long damn time. :)
On 11 Nov 2003, boredelf said...
I just caught myself studying my own sweater to figure out this cable knit thing. Of course, I don't know the first thing about knitting... so I'm sure that would help me understand. ;)
On 12 Nov 2003, jowilson said...
My mom has been really, really into knitting over the past year, (after her back injury, she had to drop pottery because it's too heavy.) She actually went to Haystack and took a knitting class. So I've been picking up all of this cool knitting stuff by osmosis, just watching her churn out hat after hat after hat. (She can do these incredibly foofy hats in a few hours. See http://www.jowilson.org/pictures/hats/. Note the wonderful overexposure on some of the hats because I still didn't know how to use my then new camera.) Anyway, she takes the hats down to the cities and gives them away to people who need them. In typical jowilson fashion, however, I haven't done anything to put that knowledge to use. My personal insecurity works itself out in learning lots and lots of stuff about whatever it is I want to do but never taking the first step. A couple of weeks ago I looked up the theory of cabling but never did anything with it. So, good job. *thumbs up*