Definitely progress. It lacks horizontal sashing, and the final border, but this is very nearly a finished quilt top: 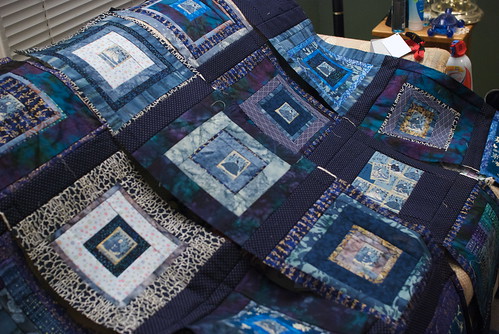 I learned some things along the way. If I'm going to do this again, I need to be really careful about pieces bowing inward in the middle. I also need to make my last stripe fairly substantial, so that I don't trim most of it away when cutting it down to the finished size.

Offset squares are good. Uneven is good. Some of the squares weren't quite big enough, and I had two choices; add another round, which would then get trimmed down, or use extra background fabric and end up with deliberately mismatched square sizes. I opted for the latter. I liked the thought of it being a little homey and uneven.

Quilts != architecture. Anyone who cries over a quarter-inch can go make their own damn quilt. 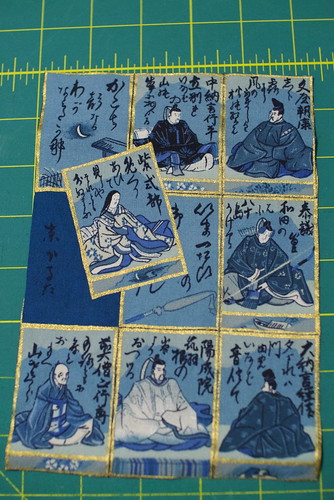 I decided to do something unusual. I've been parceling out this Japanese fabric in drips and drops, having never been able to identify it or get more. I smoothed it out on the table last week and thought, No. This isn't the right way to do it. Instead of cutting the rest into single-panel pieces, I opted to cut out a full repeat and use that for the basis of six squares. Better that the fabric was visible as it really was. It'll never see a better use.

I'll miss this one when it goes; it's monochromatic without being boring, and it's an entire quilt top full of my favorite color.

Every quilt I see is better! Looking good, Amy!

I'm gonna be sorry to see

I'm gonna be sorry to see this one go. It was all my favorite colors rolled up into one quilt. If you look for the purple / blue / green peacocky batik, you'll see one of my all-time favorite fabrics. I knew about it from equilter but had never seen it in person. When Jacob and I were walking around the quilting shop in White Bear Lake, MN, I went right to it. I told him I knew who had made it, even without checking the bolt.

I cut it very wide - I couldn't bear to leave it small. If you look at the top photo, you'll see the batik in the top right square and the far left square.

This was definitely a snack quilt: small portions done over a period of time. I liked being able to improv pieces as I went, and for that reason alone I'll definitely do this pattern again. It's a good warmup for my next quilt, which has a lot of meticulous, exact piecing requirements and an extremely subtle / limited color palette.

I'm gonna cuss that quilt. I just know it.