Right now, "Eat This Quilt" is, for lack of a less appropriate phrase, so close to being done that I can almost taste it. Hallie invited me over last night to do some crafting, and I brought it with me to work on weaving in loose threads.

We draped the quilt over the ottoman and couch while I was taking a water break, and it seemed a good time to snap a photo: 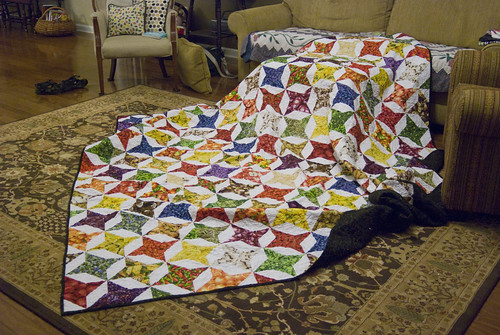 Draped during breaktime!
by domesticat.

Hallie offered to help hold the quilt up, to give an idea of scale. Admittedly, she's not very tall, but -- still! -- this thing is a beast! 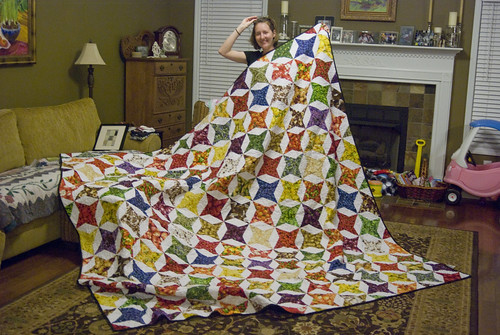 Hallie included for scale
by domesticat.

All but one of the threads are woven in on the front. As is typical, I spotted a straggler as we were folding the quilt up. I haven't tackled the threads on the back, but it's a matter of spending about an hour. I'll check the binding to ensure there are no loose edges, and once that's done ... it's over. After fifteen months, it's over.

Just for amusement value, I decided to look up the original pattern ("ribbon star") and of COURSE I did the harder variation. Do I never learn? (Don't answer that.) There's a good example of a more traditional version of the pattern in this photo: http://www.flickr.com/photos/roquilt/2993349650/ It shows the squares that normally fall between the stars.

(It's not licensed Creative Commons, so if I hear back from the photographer with permission to use the photo, I'll edit this paragraph to show a photo instead.)

Still ... it's not quite sinking in yet that it's about to be over. It's a relief. It means I'm back to completing big projects again. I may not be as fast as I was prior to Jeff's accident, but things are moving again -- I am moving again.

Life does, eventually, go on. This quilt is proof.

i think your version looks

i think your version looks better, if that counts for anything.