A little library will love you for it.

I normally don't do this sort of thing, but I want to ask a favor of my book geek friends.

Are you planning on going to Barnes & Noble anytime soon?  If you are, a moment of free kindness on your part can help out a library system I care a lot about:

Barnes & Noble and the Huntsville Library Foundation have joined forces to give you the unique opportunity to get holiday gifts for the booklovers on your list... and support the Huntsville-Madison County Public Library in the process!

The photos are going public. Gulp.

My still-unfinished Library 365 project will be shown at the library's fundraising event next Thursday. (The goal is to get to 365; I'm currently at 105, though next week will be so busy I suspect I'll add several more photos.)

It's been a week of photography around here, for those of you who aren't following the stream-of-consciousness log over at solecist.net. When I came to work yesterday morning, Melissa popped her head in the door and said, "Did you see those clouds on the way in?" I nodded; the dark, billowing shapes had caught my eye, too.

But Melissa had keys in her hand, and a plan in mind. "Come on. Let's go to the roof. Bring your camera."

I came back with only three usable photos, but they were three photos I hadn't expected to get. For dark and moody, here's a shot of the First Baptist Church's bell tower, one of the most recognizable parts of the Huntsville skyline: 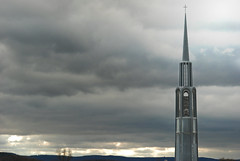 I also got two shots of the Huntsville skyline that, while not terribly inspired, are also very different from any other downtown photos currently on flickr:

I've said little publicly about an event that happened at the Huntsville main library last month, but now that a local TV station has provided a video article about the armed kidnapping and robbery of a librarian, I feel a little safer in acknowledging that the incident happened.

(Link will probably spawn a popup, requires Flash, and has audio. However, I don't think it has cooties.)

The standard life photos go up a lot faster than my version of the 365 Library Days project. I know from watching the other photos posted to the photo pool that what I'm doing is very different from what the other participants are doing. I'm not sure if my version quite qualifies as subverting the intent, or celebrating it in a different way.

I board a plane for the Beer and Cheese Tour of Seattle at six a.m. next Thursday.

(Have you guys noticed over the past few years that every trip, project, etc. always seems to get a title after it's been in my life a while? By naming it, I bring it into existence. Or something.)