On this day, a kazoo serenade

Time to issue some belated congratulations to Kat and Sean, as Saturday was their wedding day... (Click photo to see larger version.) 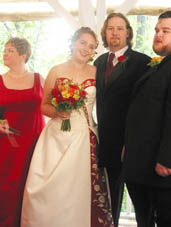 Top Ten Ways To Know You Were At Kat & Sean's Wedding

We're aware that when Kat and Sean get back from Ireland, we're going to die for #10. That's okay. It was worth it. All weddings should either include a kazoo serenade or 'The Imperial March.' Preferably both.

Congratulations, you two. Here's to your having many more years together.

On 29 Sep 2003, eviloompa said...
Damn...I so wanted to be there...but I figured that if I attended and gave everyone pneumonia then I would get beaten stupid. And you KNOW that if I was there...somehow I would have weaseled my way into the top 10 by doing something completely absurd.
On 29 Sep 2003, gfmorris said...
I'm still shocked, I say SHOCKED, that the kids thought it was me who came up with the kazoo idea. The only thing I came up with was the name. ;) Me to groomsmen: "Okay, when I make a signal, start playing the Imperial March." Allgood [I think]: "And we'll know ..." Me: "Trust me, you'll know." ... The after-party, where everyone drank alcohol *but* me. But that was by choice. I left the cleaning staff an $8 tip, and I don't think that was enough...
On 30 Sep 2003, siliconchef said...
um, where is the video (or MP3) of the kazoo march? It's a geek wedding, so there should be multimedia!
On 30 Sep 2003, PapaSmurf said...
Sorry guys REALLY wanted to be there. =(
On 30 Sep 2003, gfmorris said...
Misty: What the hell are we looking at in this photo, over?
On 30 Sep 2003, Tialessa said...
What a COOL dress! I would never have thought to bring flashlights to a wedding - kudos to the best man!!!!!!!! Congrats to the happy couple :)
On 30 Sep 2003, sarah said...
And i would have been there, but i wasn't invited! Glad you guys had fun, though. :)
On 1 Oct 2003, Katie said...
That kazoo thing sounds cool, heh. Lucky bride and groom. =)
On 2 Oct 2003, jowilson said...
Five bucks to the paypal account of whoever posts Jeremy in a tie pics first on their web page.
On 2 Oct 2003, jowilson said...
And I'll mail 50 cents to whoever can edit that sentence so it makes more sense at first glance.
On 7 Oct 2003, Inigo Montoya said...
Small correction- Allgood (Wolfman) was not the best man, the best man would be the conductor for the school of hard knocks- Geof. Sorry not everyone got an invite, we really had limited room (as attendies can attest), but rest assured that the next event will be held in an open air stadium where thousands of friends can attend. Oompa- evidently you sent sickness in your absence, some folks got sick after the wedding anyway, and kat did over in areland, i made her go to the dr. when her fever was 101.9 degrees. Not what i wanted to see for my wife during the honeymoon. But she is getting better and the trip was excellent. Thrashings will be given out on an individual basis for all those who participated as graduates of the Imperial School of Hard Knocks.
On 8 Oct 2003, gfmorris said...
Sean Morrill, I have three words for you: Bring it, bitch. LOL
On 8 Oct 2003, gfmorris said...
Oh, and John ... you owe me five bucks. That's the start of the investment for the deductible payment I'll need when Jeremy's through with me.
On 4 Sep 2004, KC said...
Sean and Kat, Sorry I couldn't make it to the wedding, I tried to call beforehand but the numbers I had were disconnected....oh well. The pictures were beautiful, and Kat: YOUR DRESS IS GEORGEOUS!!!! Hope to hear from you sometime... Later babies, KC