Make a wish, and connect the arrow

Since pixels don't come with smell-o-vision, I must tell you that these words are being typed in a quiet house that smells of fresh salsa and roasting bell peppers.  The laptop (old, beaten up) is positioned so as to block out the setting sun, which does not come directly through my front door but close enough to force my pupils to readjust.  I have a small party to be at in an hour's time.  I must not be late, so I must write fast and speak rightly the first time.

The place, now: Huntsville, Alabama.
The place, then: rural Arkansas.

I was a child of the late 1970s, whose memories just missed Jimmy Carter but remembered Reagan dimly through an apolitical child's eye.  Those who read this site know my story well; I came from a union family in a former mining town.  My tiny hometown, well under three hundred souls at the time, all looked like me because they were almost all related to me.

I was unaware of the fact that my school was all white until sometime in elementary school, when a tiny moment, and a mother's gentle misdirection, caused me to see my world with different eyes.

I have no knowledge of how old I was, but I was still a child that played with dolls.  I had been playing in the toy aisle of a store, and I picked out a doll I wanted.

I do not remember, or did not hear, the conversation that ensued; all I remember through the blur of time is that the doll was put back, because my father did not approve of it.  There was no fuss made, just a quiet redirection of interest.  I did not understand why my father did not want me to have the doll that was darker than the others, but it was conveyed that the decision was final, and there was no further discussion.

I have spent many hours of my adult life apologizing for the Deep South I was born and raised in.  As a nation we have lurched in fits and starts through segregation to civil rights, and have come through the legal finish line to something murkier, muddier.  The overt racism is -- mostly -- gone, but covert, subtler forms remain.

Who you date.
Who you prefer to hire.
What dolls you buy for your children.

We were taught in words of tolerance but deeds of racial mistrust.  It was gossipworthy when a black student first enrolled in my high school, and a blunt question when certain members of my family learned I was in a serious relationship.

I have made no secret of my political intentions this year; the magnet has remained on my car for months.  This morning, though, brought a moment that made it real to me what we as a nation are about to do here.

I clocked in at my usual time, and poked my head into the branch run room to say hello to someone I see on a daily basis.  She is a graceful woman; tall, opinionated, probably in her fifties -- and black.  She waved back to me and said, "Excited?"

She smiled.  "You've had that sticker on your car for a long, long time."

A few moments of chat made clear her excitement, as she got more animated with every sentence.  Then she stopped, paused, and said something with great fervor and utter seriousness:  "I have waited all my life for this day." 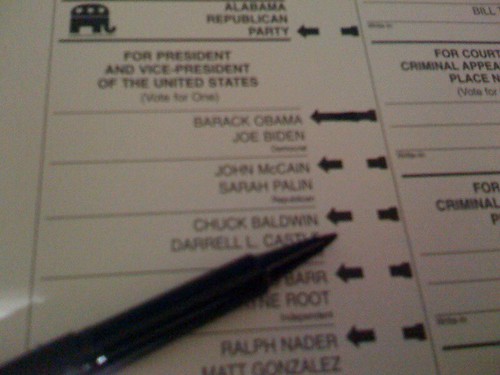 Make a wish, and connect the arrow
by domesticat.

[Original: "Make a wish, and connect the dots," on flickr]

As a country, we still have much left to fix, but we have come farther than many of us ever dreamed might happen in our lifetime.   I don't feel qualified to predict how this election will change our political and social landscape, only that it will.

I voted my conscience, though, and that is what matters.

(Apologies for the blurry photo.  Alabama state law technically forbids cameras in polling places, so even the act of snapping a photo of my ballot with my iPhone had to be done surreptitiously.)

When they count the votes....

And I want to be but a digit in those facts and figures.